RALEIGH, N.C. — Erik Haula had a goal and an assist, leading the Carolina Hurricanes to a 3-1 win over the Montreal Canadiens on Tuesday night.

Sebastian Aho also scored and Teuvo Teravainen had two assists for the Hurricanes (24-14-2), who won their second straight game after a three-game losing streak. Ryan Dzingel scored into an empty net.

Max Domi scored for the seventh straight game for the Canadiens (18-16-6), who dropped their third straight and closed out a seven-game trip with a record of 3-4.

Petr Mrazek stopped 28 of 29 shots for the Hurricanes, including a save on a breakaway by Phillip Danault when the score was tied 1-1 in the first period.

Ryan Poehling appeared to tie the score at 2-2 for Montreal with 8:08 remaining in the third period, but a replay review after a challenge by the Hurricanes concluded that Danault interfered with Mrazek on the play.

Haula opened the season with eight goals in his first 14 games before missing 19 of the next 21 due to injury. In five games since returning Dec. 21, he has three goals and six points, none bigger than his second-period score Tuesday.

Carolina entered the game with the seventh-most points in the Eastern Conference and looking to build on Saturday’s win over Washington. The meeting with Montreal was the second game in a seven-game homestand that presents a critical opportunity to gain points in the standings near the midway point of the season.

With the score tied 1-1, Haula parked in …read more

BUFFALO, N.Y. — Alex Killorn scored two goals, Tyler Johnson had a goal and two assists, and the Tampa Bay Lightning came back from a three-goal deficit to beat the Buffalo Sabres 6-4 on Tuesday night for their fourth straight win.

Ondrej Palat and Anthony Cirelli each added a goal and an assist, Kevin Shattenkirk also scored, and Andrei Vasilevskiy stopped 18 shots as the Lightning opened a four-game road trip with their 12th consecutive win against an Atlantic Division opponent.

Conor Sheary had a goal and two assists, and Marcus Johansson had a goal and an assist for Buffalo. The Sabres also got goals from Jack Eichel and Jimmy Vesey in losing their fourth in a row. Linus Ullmark made 16 saves.

Killorn’s second goal of the game and 15th of the season gave the Lightning their first lead of the game 8:08 into the third period. Pat Maroon set up the go-ahead goal with a pass from behind the net. Killorn beat Buffalo defenceman Rasmus Dahlin to receive the puck in the high slot and sent a wrist shot past Ullmark.

Shattenkirk got the tying goal less than two minutes earlier on a straightaway wrist shot that bounced off Johansson’s skate and over Ullmark’s glove. Cirelli scored into the empty net in the closing seconds.

The Lightning scored twice in a span of 2:58 to get within a goal late in the second period.

Killorn knocked in the rebound from Point’s shot that bounced off the right post on a power play. Then with about three minutes left in the period, Johnson …read more

Lifeless Sharks shut out for first time this season 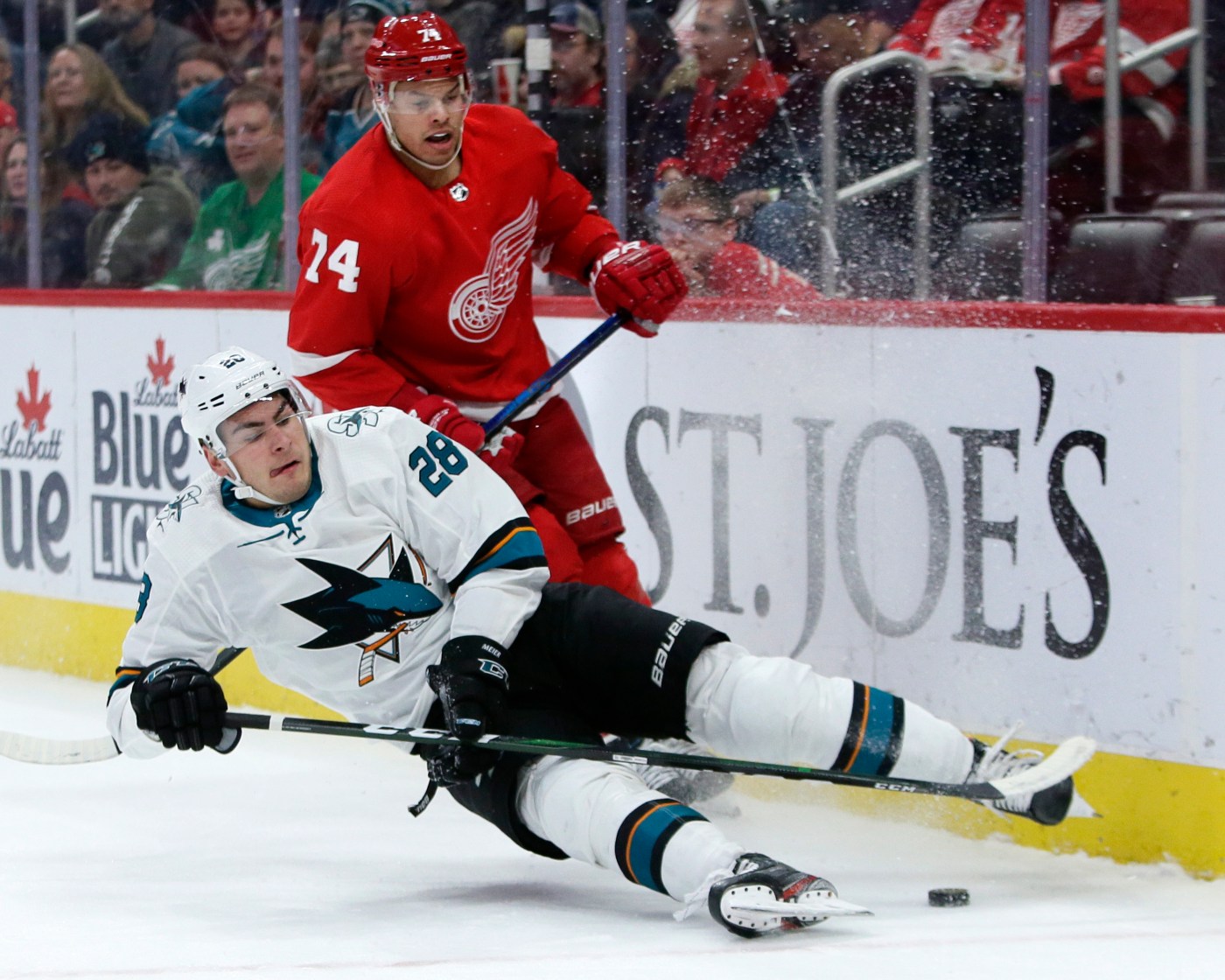 Perhaps there was no other way for the month of December to end.

Looking to build on what was their most complete effort of the season three days prior, the Sharks instead fell flat against the worst team in the NHL, losing 2-0 to the Detroit Red Wings in the opening game of a five-game road trip at Little Caesars Arena.

Tyler Bertuzzi’s goal at the 3:15 mark of the second period stood up as the winner, as the Sharks, despite 34 shots on net, were shut out for the first time this season.

The Sharks went 0 for 3 on the power play, and are now 2 for 49 with the man advantage over their last 20 games.

The Sharks were coming off a 6-1 win over the Philadelphia Flyers on Saturday, just their second victory in December. They ended the month with a 2-9-2 record, and are now 17-21-3 at the halfway point of the season.

This figured to be the most winnable game on the Sharks’ five-game road trip.

The Red Wings, in 31st and last place in the NHL, came into Tuesday on a six-game losing streak and with a 9-28-3 record overall. In fact, since losing to the Sharks in a shootout at SAP Center on Nov. 16, Detroit had gone 2-15-0, with its last victory coming Dec. 14 in Montreal.

In that miserable 17-game stretch, the Red Wings had allowed four goals or more 14 times.

They had allowed 101 goals in 5-on-5 situations in their first 40 games, one fewer than the Sharks, who were last in the NHL in that category coming into Tuesday’s game. That doesn’t account for Detroit’s penalty kill, which was ranked 30th in the league at 72.3 percent.

The Sharks would put together a momentum-building shift here and there, but otherwise sustained very little at even strength …read more

THE GLOBAL 5G LANDSCAPE: An inside look at leading 5G markets, key players, and how they are defining the future of connectivity This is a preview of NAME OF REPORT research report from Business Insider Intelligence.
14-Day Risk Free Trial: Get full access to this and all Connectivity and Tech industry research reports.

The next generation of wireless is here, and several countries are locked in a fierce battle for the top spot in global 5G development. Telecoms in 18 countries will roll out 5G networks by the end of this year, and by 2020 over one-fifth of the world’s countries will have launched 5G services.

Securing global 5G leadership is a national priority for many countries because the winner is expected to secure more than a decade of competitive advantages. The spread of 5G is pivotal for the connected world — its technical upgrades will supercharge adoption of transformative technologies and strengthen the value of old ones.

5G will serve as the backbone of the fourth industrial revolution, and the global pacesetter for the new standard could become the same for connected technologies. All told, 5G technologies are expected to contribute $2.2 trillion to the global economy over the next 15 years.

In the Global 5G Landscape Report, Business Insider Intelligence identifies three countries — the United States, South Korea, and China — that are spearheading the 5G revolution. The report compiles 5G snapshots of the three countries, with each providing an overview of the market’s telecoms space and details on what is contributing to — or hindering — its development. We look at the notable telecoms in each geography and identify their 5G launch efforts, as well as discuss what the opportunities are for each company.

Here are some of …read more