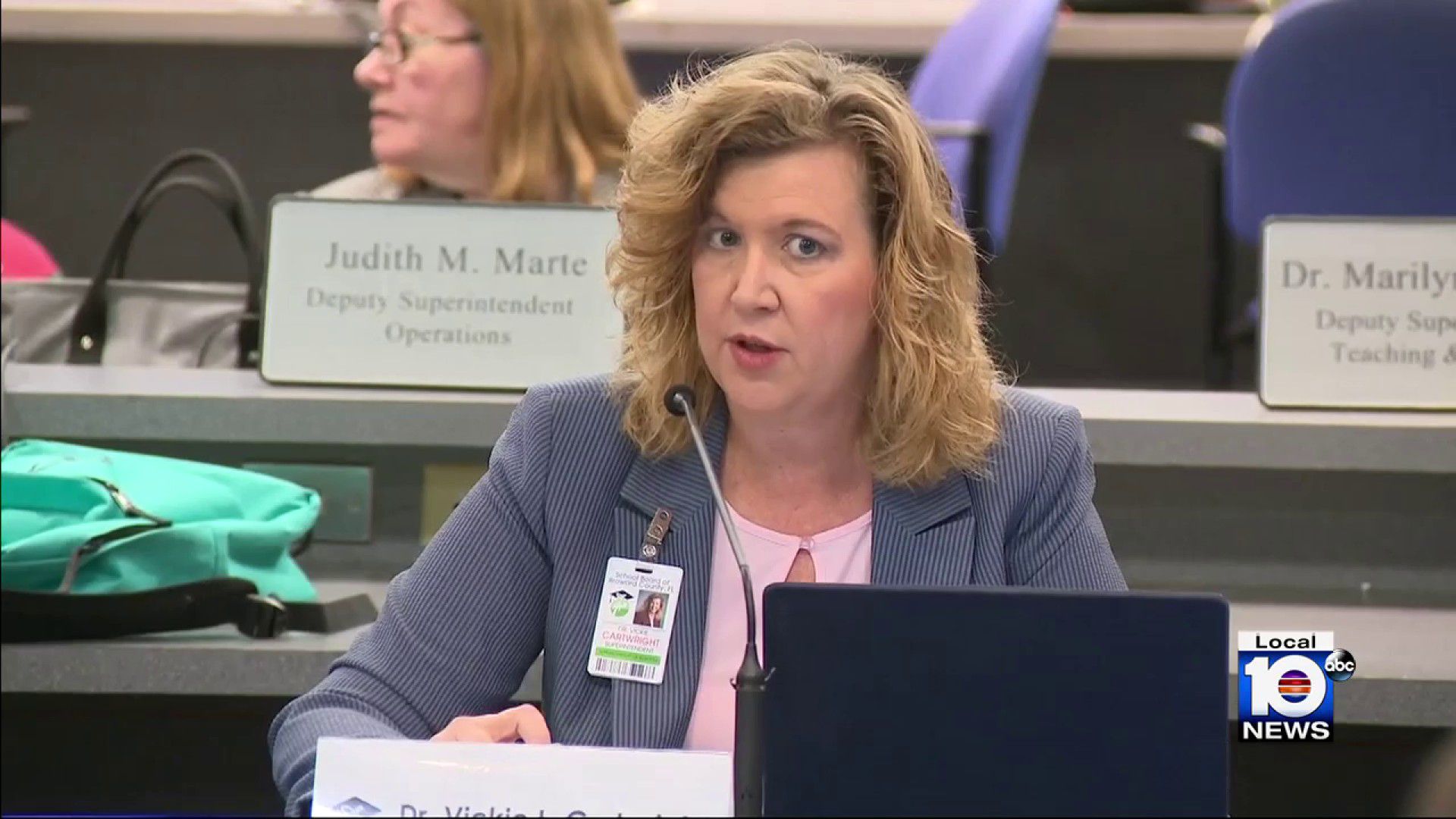 The Broward School Board has once again voted to fire Superintendent Vickie Cartwright who has only held the position since last year.

Board members voted during a special board meeting Tuesday to terminate Cartwright with a mutual separation agreement.

During the meeting, Cartwright spoke out in her defense.

“We’re moving in the right direction,” she said. “Student improvement is increasing, student safety remains at the forefront, SMART bond program — these glaring areas have always been of the highest concern. We’re making forward momentum. Again, the data speaks for itself.”

Some parents, however, spoke during the meeting, saying Cartwright has been ineffective and had four months to get back to the state’s request for documents from the district following a grand jury report.

Cartwright claimed the requests made were never formally submitted in writing.

The Broward School Board is voting Tuesday on whether or not to fire Superintendent Vickie Cartwright.

Tuesday’s vote came after Board Member and Chair Lori Alhadeff told the South Florida Sun Sentinel that she planned to ask the board to fire Cartwright without cause Tuesday, giving her the 60-day notice required under her contract.

Cartwright’s last day on the job would be March 25.

“I think it’s important to have this done and executed according to her contract and as quickly as possible,” Alhadeff told the Sun Sentinel. “I don’t think it’s healthy for this district to keep continuing with Dr. Cartwright’s leadership after she is terminated. I think it creates more disruption and chaos.”

New board member Allen Zeman had filed a motion this month to fire Cartwright, with her last day being June 30.

“She didn’t perform in a way that gave us the confidence that she was our longer term leader for Broward County Schools,” Zeman said. “Let me be very clear today’s action had nothing to do with politics.”

Dutch firm: US, allies near deal to limit chip tech to China

Tuesday’s vote came a day after Scott Strauss, vice chancellor of the Department of Education’s Office of Safe Schools, wrote in a letter that Cartwright failed to turn over documents to the state regarding school safety data for the district.

It also comes two months after Gov. Ron DeSantis’s five appointees swiftly pushed the superintendent out during a public meeting to the shock of the other board members.

During that November meeting, Torey Alston, who was then-chair of the board, at some point brought up the idea to discuss the superintendent’s fate with the district.

Alston and board members Daniel Foganholi, Ryan Reiter, Kevin Tynan, and Manuel Serrano voted in favor of firing the superintendent.

In December, the school board voted again on the issue, deciding to keep the superintendent who has held her position since February 2022 until they could revisit the issue with the newly elected members.

“I like Dr. Cartwright. I think she is a very nice person, however I think it’s incumbent upon this board to realize when our superintendent is over her head,” said Alhadeff in December, who was one …read more