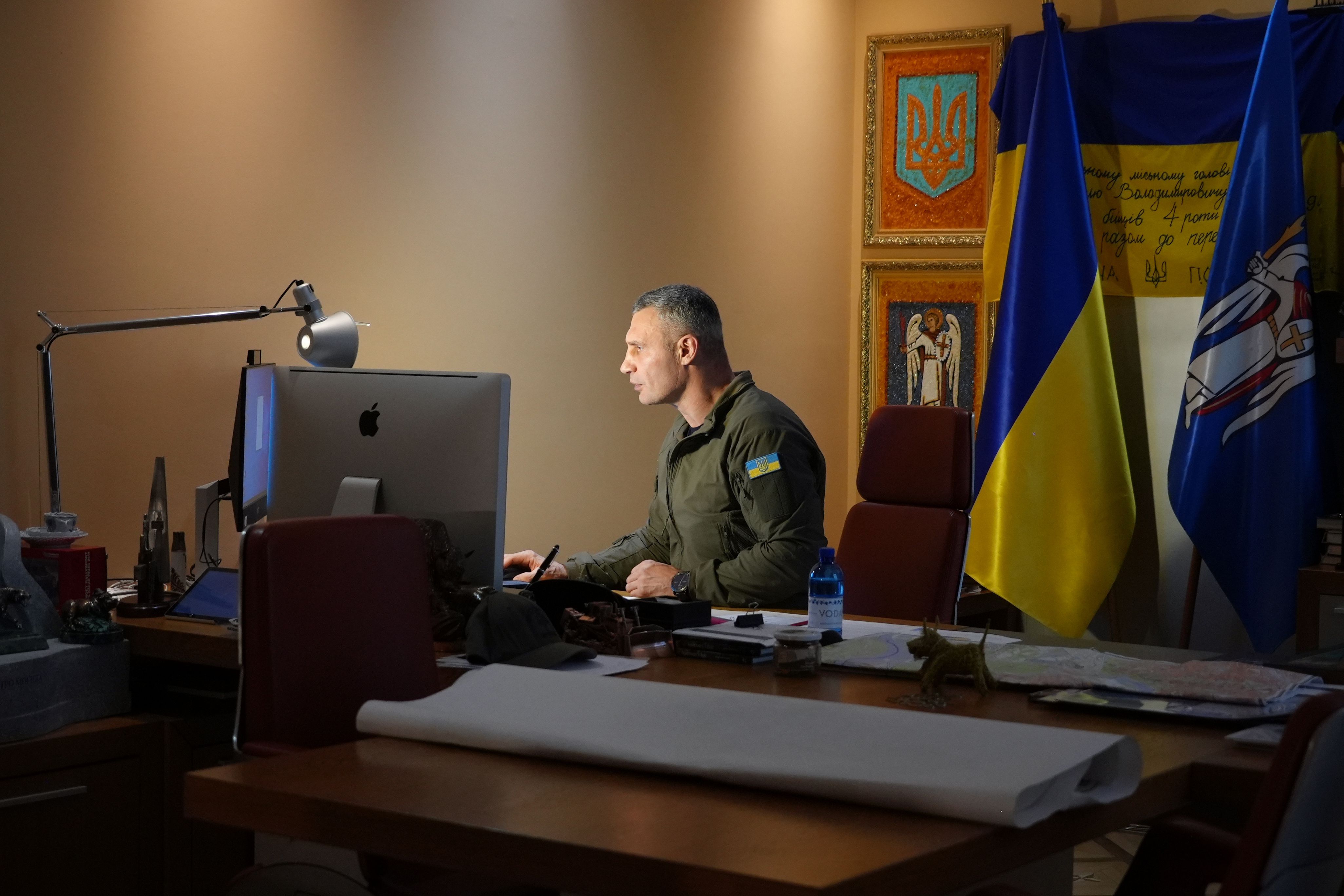 The body armor propped against a radiator, ready for use, the spent shell casing adding to clutter on his desk, the boxing memorabilia and the sign asking visitors to leave firearms at his door: All shout that this is the office of an extraordinary mayor, in extraordinarily difficult times.

Other, more personal touches fill out the picture: The book on a sideboard about British wartime leader Winston Churchill is signed “With best wishes” by the author, former British Prime Minister Boris Johnson.

And then there’s the plastic toy figure of a muscular boxer, with clenched fist raised — a reminder of how physically imposing, fearsome even, Vitali Klitschko was in his world title-winning, opponent-pummeling heavyweight boxing prime.

That much hasn’t changed. His handshake is crushingly firm, his gaze steely. But the pressures on the shoulders and on the time of the 51-year-old mayor of Ukraine’s capital city are heavier now than they ever were when his fortunes were measured in three-minute rounds that ended with clangs of a bell.

“If I tried to explain to you all the challenges that I have, we (would) need weeks,” Klitschko said.

As was also the case during his years as a professional prizefighter, the fight for survival he’s engaged in now is primal. But it’s more essential, too: To prevent power from going out entirely in his city of 3 million people, to ensure that families don’t freeze in the cold that winter’s onset is bringing, and to keep Ukraine’s hyper-digital capital hooked up to the outside world.

All this in a horrifying war against an invader, Russia, seemingly intent on destroying all those things — with repeated barrages of missiles and exploding drones that have battered Ukraine’s power grid and other key infrastructure.

Pentagon debuts its new stealth bomber, the B-21 Raider

“It’s terror,” Klitschko said, delivering the word like a punch in an Associated Press interview in his City Hall office on the invasion’s 268th day.

“They (left) us freezing,” he said. “Without electricity, without heating, without water.”

Power still comes on — sometimes — but it can no longer be relied upon. In a city with ubiquitous wifi and where most anything could be done online, rolling hours-long electricity cuts are the horrid new norm for many. President Volodymyr Zelenskyy says Russian strikes have damaged around half of Ukraine’s energy infrastructure.

In blacked-out Kyiv restaurants, diners feel their way through meals in near-darkness, served by waiters carrying candles. Residents wake in the dead of night — if that’s when it’s their turn to get a few hours of power again — to shower and do laundry.

So what’s the worst-case scenario? How much worse can it possibly get?

Part of the answer is out of Klitschko’s very large hands. How difficult life will become depends, in part, on how many more missiles Russian President Vladimir Putin has left in his arsenal to throw at Kyiv and other cities.

But on the plus side, based …read more