Parkland shooter’s brother says he pulled out of testifying due to ‘harassment,’ plans to sue county 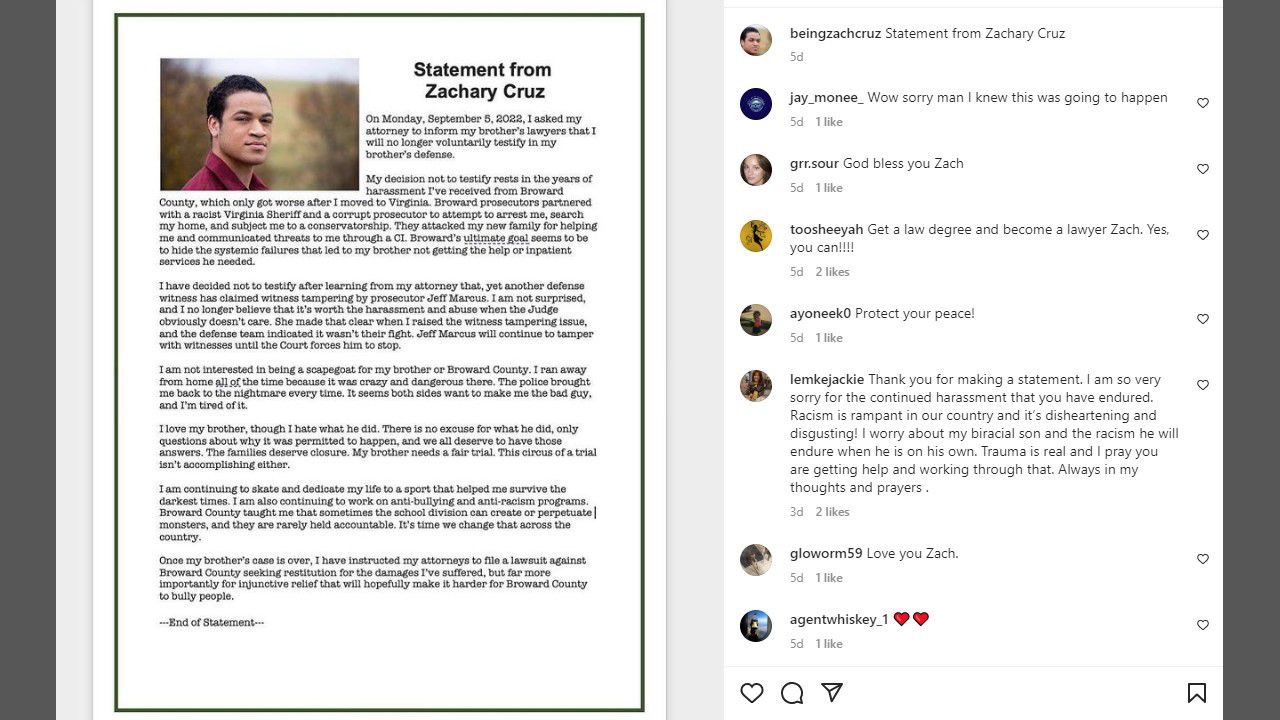 The brother of the Parkland school shooter pulled out of voluntarily testifying in his brother’s defense in his ongoing death penalty trial owing to “years of harassment” by Broward County and intends to sue the county, he said in a social media post.

In the post, on Zachary Cruz’s “Being Zach Cruz” social media pages, Nikolas Cruz’s brother said the harassment “only got worse after (he) moved to Virginia.”

“Broward prosecutors partnered with a racist Virginia Sheriff and a corrupt prosecutor to attempt to arrest me, search my home, and subject me to a conservatorship,” Zachary Cruz wrote. “They attacked my new family for helping me and communicated threats to me through a CI (criminal informant). Broward’s ultimate goal seems to be to hide the systemic failures that led to my brother not getting the help or inpatient services he needed.”

Cruz said he also decided to not testify after learning from his attorney that “yet another defense witness has claimed witness tampering by prosecutor Jeff Marcus.”

Various allegations are made in a statement posted to a Facebook page titled “Being Zach Cruz”. Background on our coverage of the call to a witness mentioned in this “Statement from Zachary Cruz.”🧵: https://t.co/KSzPw7CRV0 More: https://t.co/P8tGbzZEM3 pic.twitter.com/Xup42eW0Ua

“I am not surprised, and I no longer believe that it’s worth the harassment and abuse when the Judge obviously doesn’t care,” Cruz said. “She made that clear when I raised the witness tampering issue, and the defense team indicated it wasn’t their fight. Jeff Marcus will continue to tamper with witnesses until the Court forces him to stop.”

Cruz wrote that he is “not interested in being a scapegoat for (his) brother or Broward County,” saying he ran away from home because it was “crazy and dangerous there.”

“I love my brother, though I hate what he did. There is no excuse for what he did, only questions about why it was permitted to happen, and we all deserve to have those answers,” Cruz said. “The families deserve closure. My brother needs a fair trial. This circus of a trial isn’t accomplishing either.”

He then outlined his plan for legal action against the county.

“Once my brother’s case is over, I have instructed my attorneys to file a lawsuit against Broward County seeking restitution for the damages I’ve suffered, but far more importantly for injunctive relief that will hopefully make it harder for Broward County to bully people,” Cruz wrote.

Local 10 News reached out to the Broward County State Attorney’s Office for comment.

A spokesperson said “there is no merit to any of the allegations Zachary Cruz made on Instagram. There is nothing wrong with an …read more