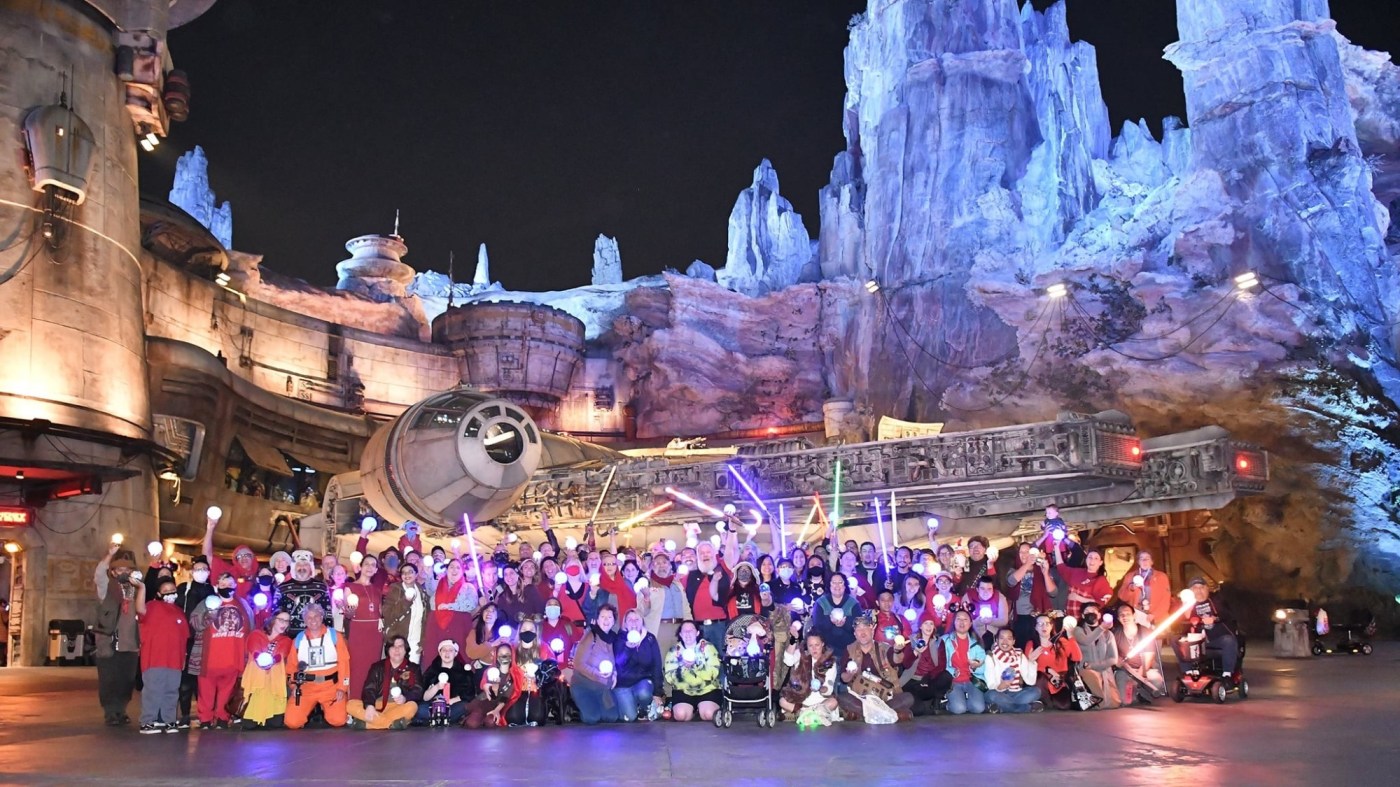 Star Wars fan Shawn “Obi-Shawn” Crosby led a few hundred devotees of the 1978 “Star Wars Holiday Special” in a Life Day celebration of peace, harmony and freedom in Galaxy’s Edge at Disneyland that he hopes becomes an annual tradition at the Anaheim theme park.

“We spent a good part of the day educating ‘Batuuan locals’ on the history of Life Day both real and fictional,” Crosby said via email. “Cast members were excited to learn all about this weird Star Wars holiday they suddenly found themselves celebrating.”

Star Wars fans celebrated the Wookiee holiday of Life Day in Galaxy’s Edge at Disneyland on Wednesday, Nov. 17 with themed food, merchandise, holiday carols and a parade through the Star Wars land.

Disneyland’s embrace of the first official Life Day celebrations in the park hints at what could be next for Galaxy’s Edge festival celebrations, character interactions, live entertainment, themed restaurants, new attractions and even a Star Wars hotel.

Most Star Wars fans are familiar with Life Day through the delightfully bad “Star Wars Holiday Special” that first aired on Nov. 17, 1978 — marking the Life Day celebration date, according to StarWars.com.

Life Day — which traces its roots back to the Wookiee planet of Kashyyyk — celebrates the life-giving and life-affirming powers of the Tree of Life. During the Life Day holiday season, Wookiees dress in traditional red robes, gather around a trimmed tree and exchange gifts with relatives.

'A black Black Friday': Here's what analysts are saying as global stocks plunge on fears about new COVID variant

The Life Day food and merchandise available at Disneyland this holiday season honored Star Wars die-hards for their decades of fandom for the “Holiday Special,” according to Crosby.

“While I don’t expect the show to appear on Disney+ anytime soon — and part of me hopes it doesn’t and it remains an ‘underground’ property — we as fans feel a little vindicated after 43 years of personal celebration,” Crosby said.

Lyrics for several Life Day carols were distributed to the celebrants in Galaxy’s Edge with Star Wars-related words inserted into familiar Christmas and Hanukkah songs.

“I led the sing-along as cast members and passers-by joined in,” Crosby said.

After the carols, the celebrants marched in a long procession with glowing Life Day orbs in hand past the Black Spire marketplace, landspeeder garage, Droid Depot and Oga’s Cantina before pausing at the Millennium Falcon landing pad for a group photo.

“While Chewbacca came out to celebrate with us a number of times at our 2019 event, he was nowhere to be seen during our celebrations this year — an absence I’ll chalk up to COVID safety,” Crosby said. “He was definitely missed.”

After the photo op, the Life Day celebrants gathered around the Wishing Tree in the courtyard of Savi’s lightsaber workshop to remember lost friends, family and fans.

“A participant bounding as Princess Leia read her invocation from the ‘Holiday Special,’ reminding …read more