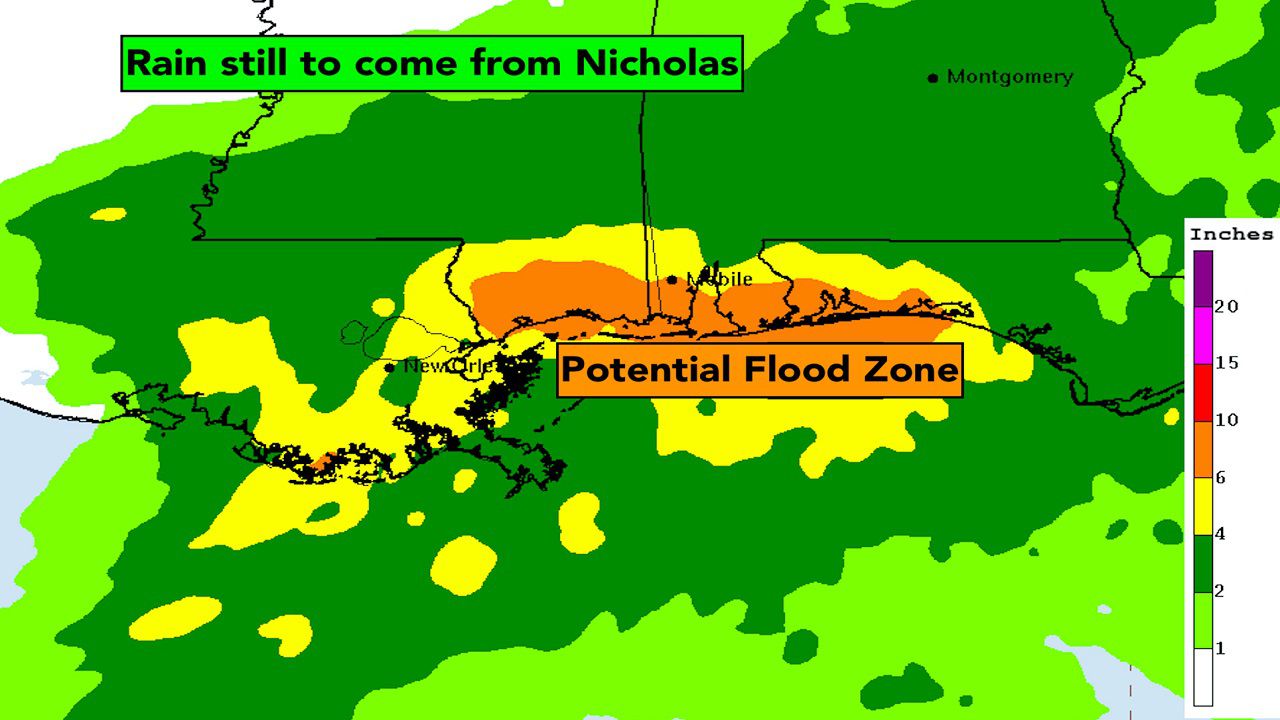 The winds are winding down in Tropical Depression Nicholas, but the rain continues to fall. While the center of Nicholas’s circulation is crawling across southwestern Louisiana, the heavy rain on the east side of the storm has expanded all the way to the Florida Panhandle.

Bands of rain moving in from the Gulf will continue to contain tropical downpours. A total of 20 inches of rain is still forecast for some locations along the Gulf coast. Flash Flood Warnings extend all along the northern Gulf coast.

The steering currents have collapsed around Nicholas, so it now appears the system will simply wind down without moving very far.

Northeast of the Bahamas, Tropical Disturbance #1 is trying to get organized. The National Hurricane Center is giving it a good chance to turn into a tropical depression or tropical storm as it tracks in the general direction of eastern North Carolina.

The consensus of the computer forecast models is that it will come close to the Mid-Atlantic coast before arcing out to sea. Forecasts for weak or developing systems are always a bit iffy, so they’ll have to watch it along the East Coast.

Some forecasts show this system looping offshore, so we might be watching it for a while.

On the other side of the Atlantic, Tropical Disturbance #2 is also getting closer to being classified a tropical depression or tropical storm. The atmospheric pattern is slightly hostile over the disturbance’s path west, so only slow, steady strengthening is currently expected.

We don’t like systems that form fairly far south and then head west across the tropical Atlantic. Because they start out in the southern part of the tropical belt, they have to turn harder to avoid land. So when one like this pops up, we pay extra attention.

Influencer marketing stats: How creators have impacted businesses in 2021

The long-range computer models are not in agreement about this system’s eventual path. There is no sign at the moment that it would threaten the U.S., but that’s too far in the future to be sure. For the next 5 or 6 days, it will head in the general direction of the northeastern Caribbean Islands.

Its future path is, to some degree, related to how strong it becomes. Since the atmospheric pattern is only marginal, the computer forecast models are struggling to settle on a strength and track. In any case, nothing will happen with this system this week.

Disturbance #3 is over Africa. When it emerges off the coast in the next couple of days, the computer forecast models predict that atmospheric pattern will be conducive for it to develop into at least a tropical depression somewhere near the Cabo Verde Islands. Preliminary projections show it moving toward the north.

Nothing else appears to be brewing at the moment.

The Houston doctor who was fired for administering leftover vaccine doses is suing Harris County, Texas, after being acquitted by a grand jury