6 million Californians living in poverty, down 704,000 in a year 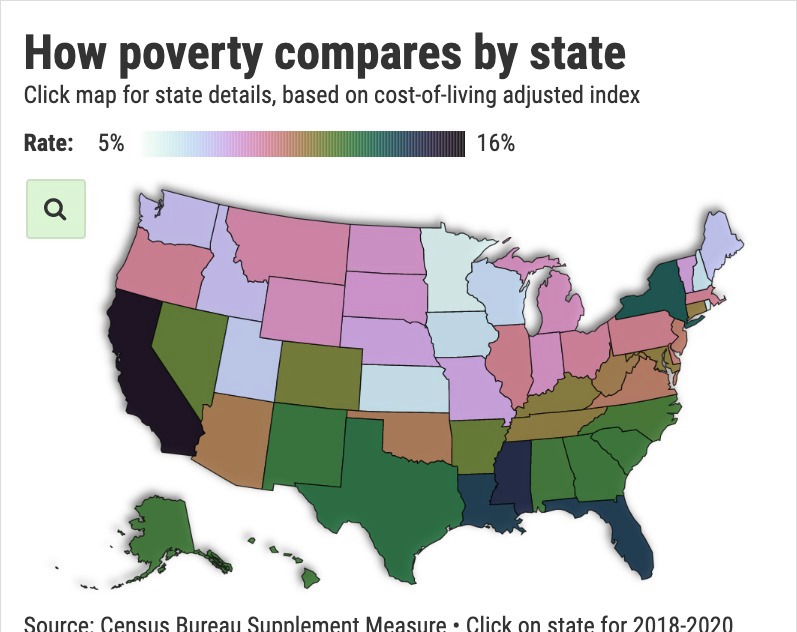 California leads the nation in poverty among its residents, but it’s also seen the biggest drop in its poor, according to new Census Bureau data released Tuesday.

An average 6 million Californians had incomes below poverty levels between 2018 and 2020, the highest count in the U.S., according to the bureau’s Supplemental Poverty Measure. That count was down 704,000 from 2017-2019 — the nation’s largest drop.

This relatively new survey by the Census Bureau dates to 2009, and is adjusted for the varying cost of living among the states. Texas had the second most impoverished population at 3.6 million, followed by Florida at 3 million.

The bureau’s three-year poverty metric includes government assistance programs as part of a household’s income, along with affordability factors, which are key reasons why high-cost California is often ranked at the bottom.

Just over 15% of California residents were impoverished in 2018-20, the second-highest poverty rate among the 50 states and the District of Columbia. Nationally, 36.5 million Americans lived in poverty or 11.2% of the population.

California’s poverty count did improve over the year, as it has most years since the Great Recession. The 704,000 residents lifted from the lowest level of poverty was more than double the 315,000 annual rate seen statewide from 2012 through 2019.

As a result, California saw a 1.8 percentage-point drop in the share of the population in poverty from 17.2% in 2017-19. Only seven states had bigger drops.

Various government support programs kept a lid on poverty amid the pandemic business chill. When the Census Bureau looked only at 2020 trends on a national basis, U.S. poverty was 9.1%, using supplemental math, down 2.6 percentage points from 2019. The 2020 poverty rate was 11.4%, using a tabulation that did not include stimulus aid.

“This really highlights the importance of our social safety net,” said Liana Fox, chief of the census bureau’s poverty statistics.

California has plenty of work to do on its poverty challenge.

On the income side of the equation, better-educated Californians have numerous high-paying job opportunities, notably those tied to new technologies. But other significant California industries pay poorly — especially for a high-cost state — such as leisure and hospitality, agriculture and many personal services jobs.

California’s median household income was $80,440 in 2019, sixth-highest among the states. But a measure of income inequality — …read more