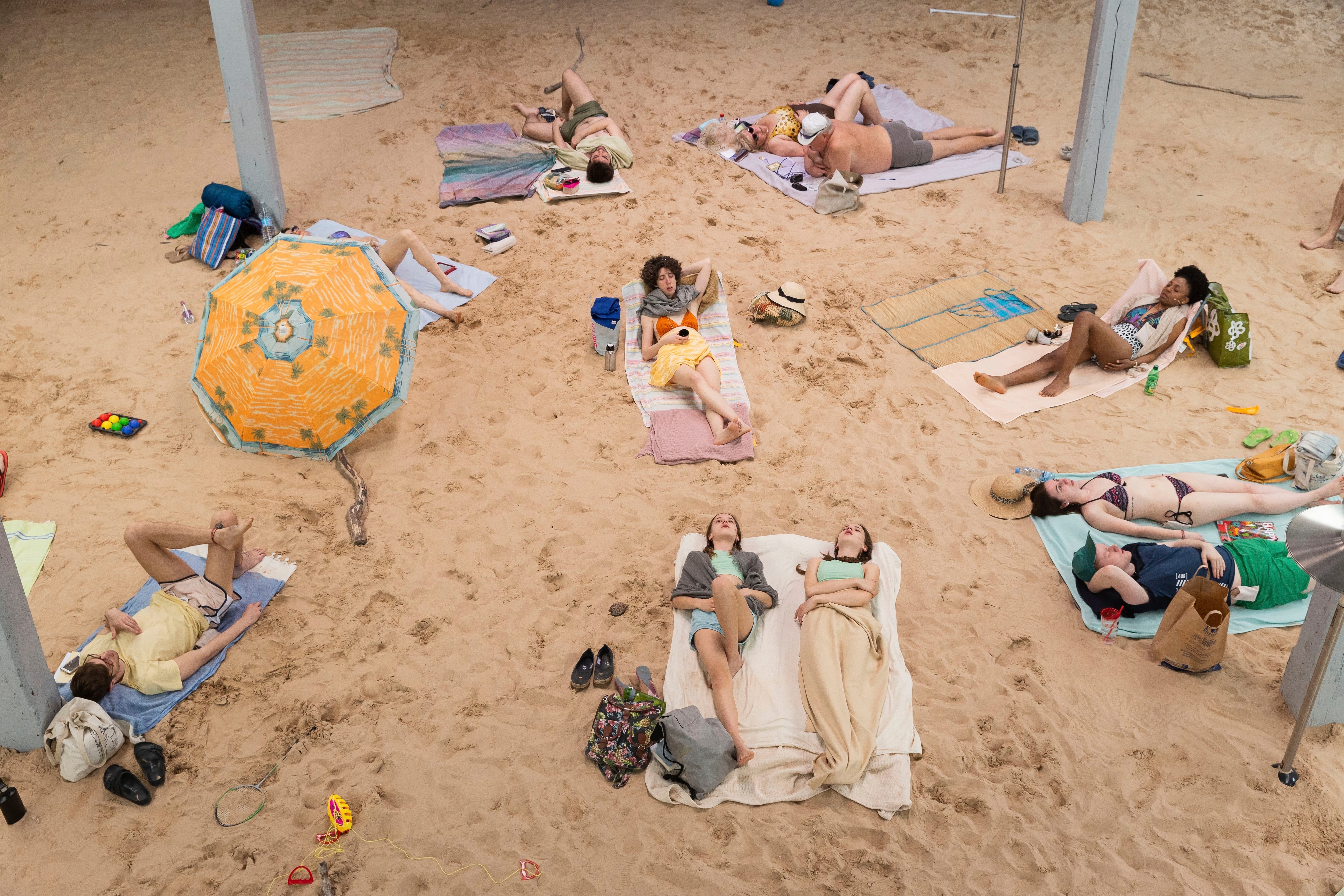 How do you turn a performance space in Brooklyn into a day at the beach?

Answer: Truck in 21 tons of sand from New Jersey in 50-pound bags and dump them out onto the floor — all 840 of them.

That’s how the production crew at the Brooklyn Academy of Music set the stage for a prize-winning opera about global warming, “Sun and Sea,” which is having its U.S. premiere this month.

Created by three Lithuanian artists, the hour-long opera features 13 singers sitting or lying on beach blankets under a hot sun. They portray characters identified in the libretto — sung here in English — by generic titles like Wealthy Mommy and Workaholic. Non-singing extras fill out the scene, building sandcastles, playing cards, walking a dog or just strolling around.

“It started from the image of a beach watched from above and the people gathered there,” said director Rugilė Barzdžiukaité, speaking from Lithuania via Zoom. “We see them in their very fragile condition because they are half-naked … just like the cosmic body of Earth which is also very fragile. And the beach is getting warmer and warmer every year. That’s how it came together.”

Once they decided on global warming as their theme, the question became how to explore that through characters who are mostly oblivious to the problem.

“We were thinking how can you write about climate change because it’s such a big and anonymous topic,” said librettist Vaiva Grainyté. “So for these characters and singers it’s like different clouds of thoughts, inner monologues about very mundane and simple things.”

But troubling hints of impending doom creep in.

An example Grainyté cites: one lady complains about messy dogs at the beach, but also mentions how she found three edible mushrooms out of season in December. “This little paradox somehow gives a hint of the disorder in nature. The feeling of the tragedy and apocalypse is very present but it’s subtle, not direct.

“There’s nothing like, ‘Oh my God, the world is about to end,’” she added.

Lina Lapelyté, who composed the music, said, “We wanted to have this very bright beach, almost too bright to believe it’s possible.

“And so the music is also very light,” she said. “It’s not heavy, quite poppy. Sometimes maybe it reminds you of a pop song that you know, but it’s actually none of the songs you know.” The musical accompaniment is provided by a recorded phonogram synthesizer.

The opera premiered in Lithuania in 2017 and was invited to the Venice Biennale 2019, where it won the Golden Lion for best national presentation.

“Rarely has an environmental message been so subtly, humorously, tellingly conveyed in an artwork,” raved critic Igor Toronyi-lalic in the British magazine The Spectator.

As in Venice, the BAM production in the intimate Fishman Space will have the audience — limited to 100 people at any one time — standing and looking down on the beach from a balcony that surrounds the stage on all four sides. The cast will repeat the show five times each day, with spectators free to …read more