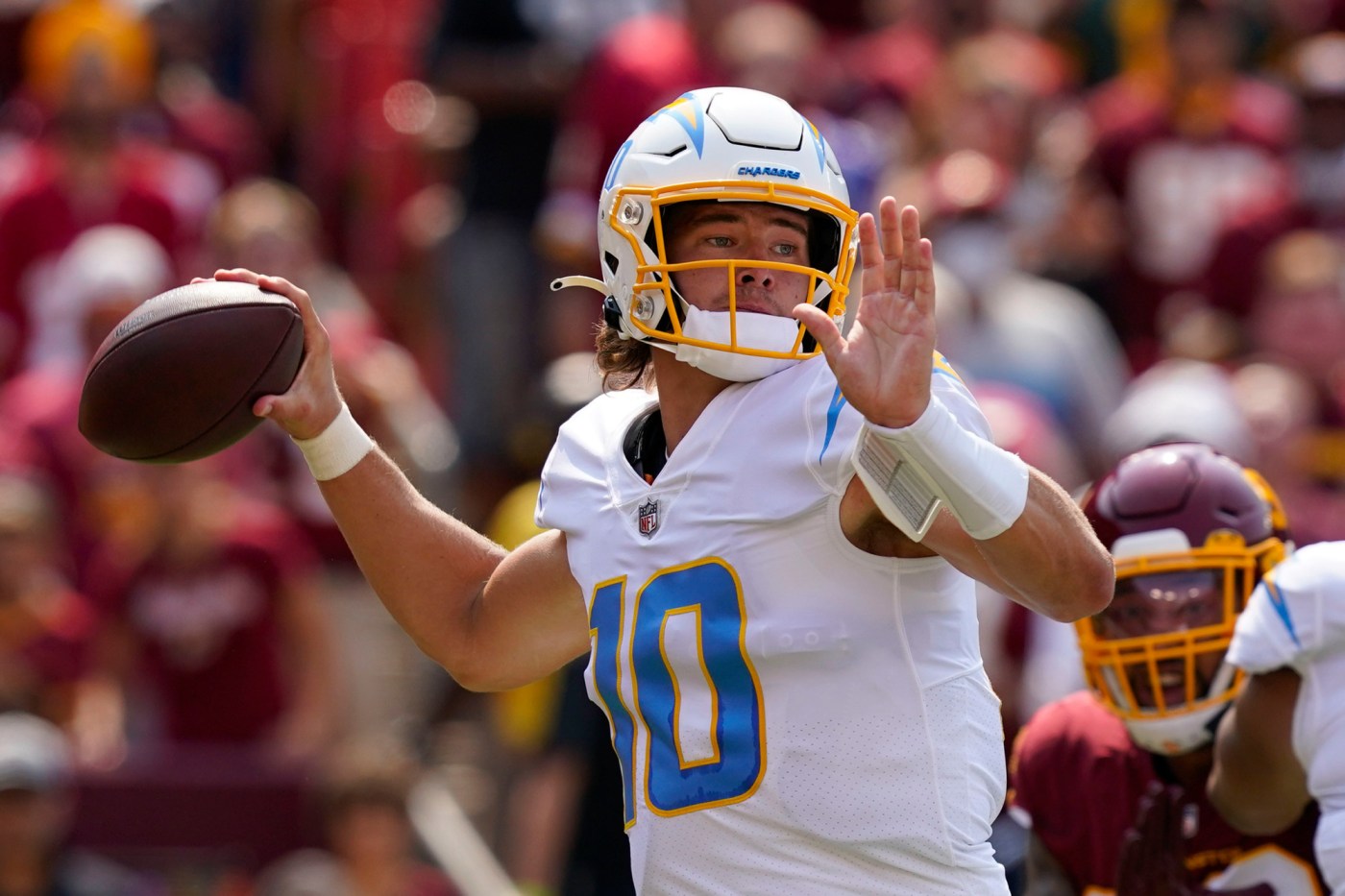 LANDOVER, Md. — Among unexpected events, the Chargers trailed the Washington Football Team in the fourth quarter Sunday at FedExField for the regular-season opener.

Chargers quarterback Justin Herbert had a bad interception in the red zone and wide receiver Keenan Allen had rare dropped passes. But the biggest surprise was Washington fans chanting the backup quarterback’s name.

Taylor Heinicke was in for relief after Ryan Fitzpatrick injured his hip in the first half. The Chargers needed a momentum-changing play to get out of their Week 1 deficit.

Linebacker Kyzir White delivered the momentum with a forced fumble and Herbert took it from there to lead the Chargers to comeback 20-16 victory to open the 2021 season.

Herbert’s interception came with 12:23 in the fourth quarter after William Jackson III jumped in front of tight end Stephen Anderson to get the takeaway. But Washington running back Antonio Gibson gave the ball back a play later after White forced it out and Kenneth Murray recovered.

Herbert capitalized with a 3-yard touchdown pass to wide receiver Mike Williams to regain the lead 20-13 with 11:21 in the fourth quarter.

Heinicke shook off a sluggish start with a 37-yard throw to wide receiver Terry McLaurin during Washington’s first drive of the second half. Heinicke’s throw got past Nasir Adderley and McLaurin kept his feet inbounds to complete the play near the sideline. Adderley got beat again in coverage when Heinicke found tight end Logan Thomas for an 11-yard touchdown to give Washington its first lead at 16-13 with 11:20 in the third quarter.

Fitzpatrick left the game with a right hip injury after taking a hit from Chargers edge rusher Uchenna Nwosu with 8:57 in the second quarter. Heinicke’s first two throws were against cornerback Asante Samuel Jr., but the Chargers’ rookie forced incompletions.

Heinicke’s first points came on the final drive of the first half. He led Washington down the field with 48 seconds left to set up Dustin Hopkins’ 48-yard field goal. Joey Bosa’s 15-yard roughing the passer penalty prolonged the drive.

The Chargers went to halftime with a 13-9 advantage. Herbert completed 19 of 27 passes for 179 yards in the first two quarters.

Herbert led the Chargers on a 76-yard scoring drive in the second quarter, but it ended with a 33-yard field goal from Tristan Vizcaino to increase the team’s lead 10-6. They settled for a field goal because Allen had a rare drop on third-and-4.

The Chargers were denied again after they failed to score in a goal-to-go situation. Vizcaino made a 27-yard field goal to increase the Chargers’ lead 13-6 with 48 seconds left at halftime.

But the Chargers had no issues against Washington’s vaunted defense on the opening drive with a balanced attack that finished with Austin Ekeler crossing the end zone on a 3-yard run.

Herbert went 6 of 6 with 40 passing yards on the opening touchdown drive. Larry Rountree III and Ekeler combined for 30 rushing yards.

Washington trimmed the Chargers’ early lead with a 30-yard field goal from Hopkins to make it 7-3 with 2:57 in …read more