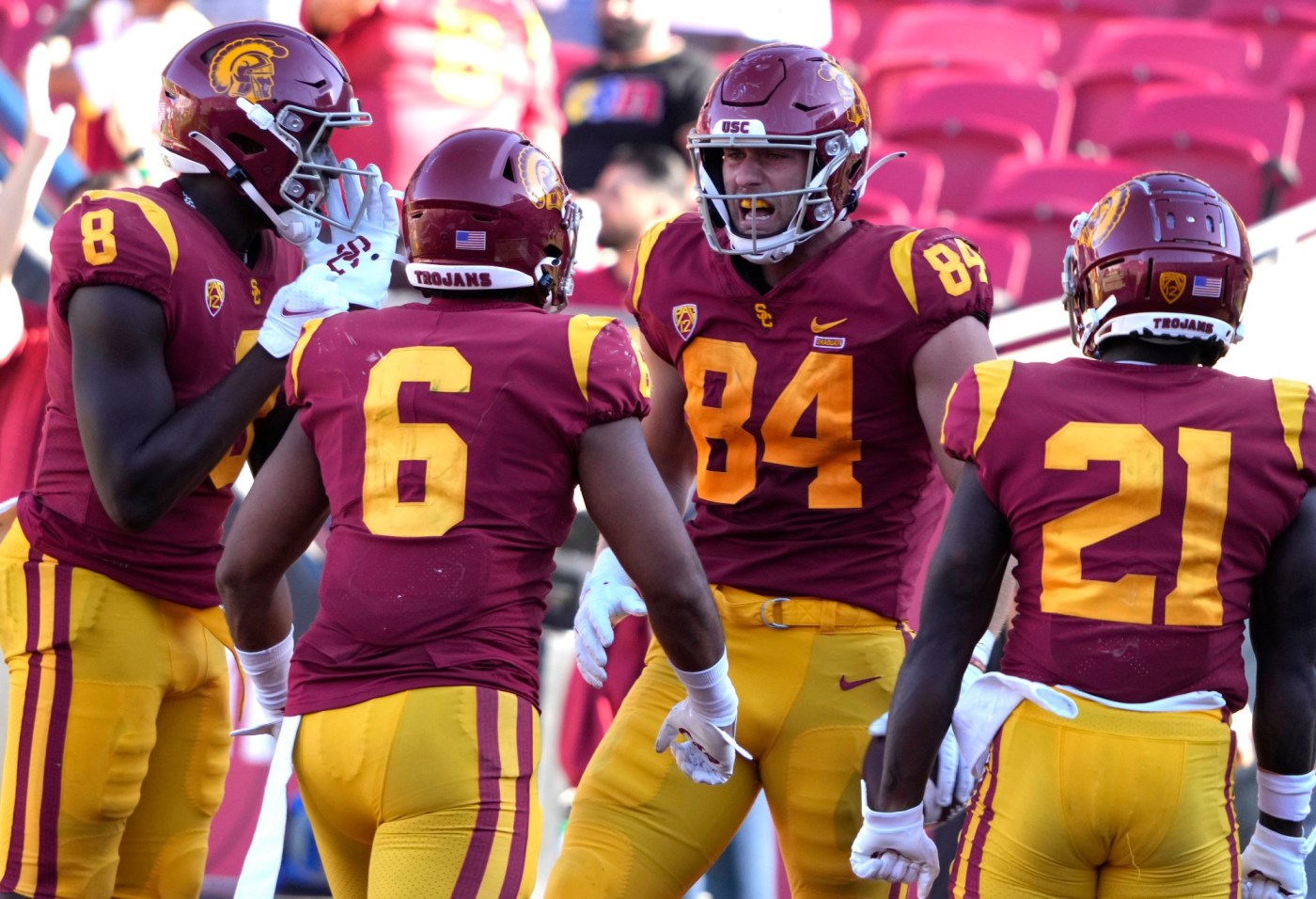 LOS ANGELES — In the USC football season opener, fans saw something on offense they have been familiar with for Trojan teams of recent years: Two-tight end formations.

With either Erik Krommenhoek or Jude Wolfe at H-back and either Malcolm Epps or Michael Trigg at Y-receiver, USC utilized the “12-personnel” group for around two-thirds of its snaps in the win over San Jose State last weekend.

USC (1-0) viewed this 12-personnel group – named because it features one running back and two tight ends – as helpful in establishing 160 yards rushing in the opener, as well as developing the pass game. Sometimes both tight ends would line up attached to the tackles, sometimes one would be flexed outside and other times both would be flexed.

By the end of the game, USC had three tight ends catch passes compared to two receivers. Krommenhoek, Epps and Wolfe combined for five catches, 56 yards and one touchdown by Krommenhoek to put the icing on the victory.

“It is something that we’ll continue to carry, 12 personnel, I think in each and every game,” head coach Clay Helton said Thursday. “To the latitude of will it be 50 snaps? I don’t know that.”

That’s because for Saturday’s Pac-12 opener against Stanford, USC will have speedy wide receiver Gary Bryant Jr. back.

Bryant Jr. missed the opener after exiting health and safety protocols just before the game. With him on the sidelines and unable to play, USC had one returning contributor at receiver – Drake London – and lots of new or untested faces around him.

Noom users say they feel misled by the diet app

Bryant will be back Saturday and gives quarterback Kedon Slovis another familiar face. He caught only seven passes for 51 yards as a true freshman last year, but he’s been around and has earned some trust.

So that will allow USC to mix up its formations a little more against Stanford, while still preserving the 12 personnel that was effective against San Jose State.

“Being able to get a Gary back is important,” Helton said. ” I look forward to watching this week as we increase the personnel packages and be able to hopefully throw off Stanford a little bit, to be able to dive in and out of things that we think are effective.”

When Stanford has the ball

After going with two quarterbacks in the season opener, the Cardinal (0-1) announced this week that sophomore quarterback Tanner McKee would be the starter against the Trojans.

McKee made no mistakes in the opening loss to Kansas State, which is how he distinguished himself from Jack West and his two interceptions. But McKee will struggle to keep the Stanford offense moving if it can’t get more production out of its run game against USC.