Alexander: Dodgers’ Kenley Jansen has a rough night and hears about it 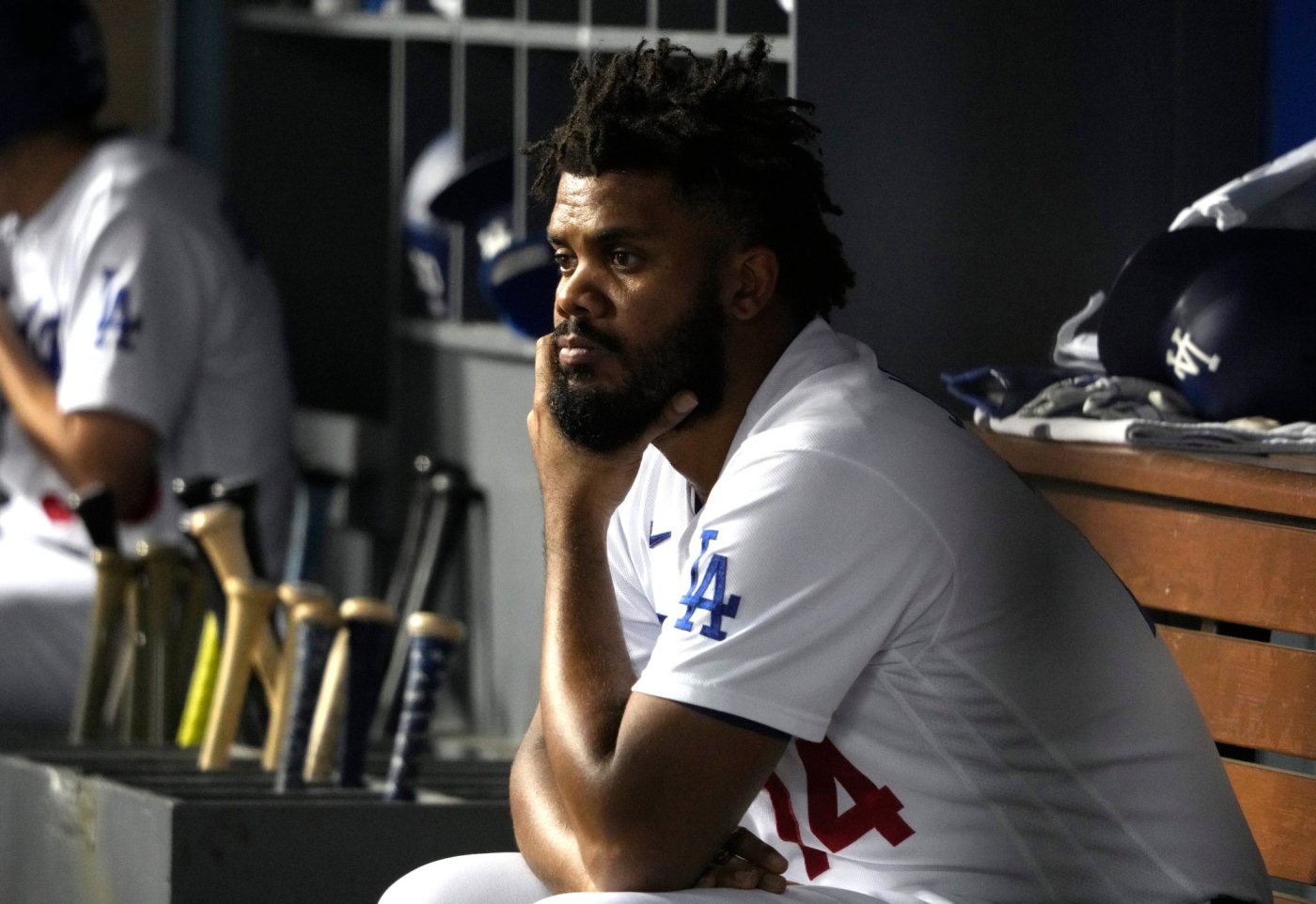 It is undoubtedly small consolation – or maybe no consolation at all – to frustrated Dodger fans, both the ones booing in the ballpark and the ones yelling at their TVs, phones or tablets on Wednesday night while watching him squander a lead to the Giants with a share of first place on the line.

It might drive you crazy that he’s not perfect, as closers are expected to be (and aren’t). It’s likely tough to take that any momentum gained from Tuesday night’s dramatic comeback victory was squandered in the time it took Wilmer Flores to redirect Jansen’s high cutter 406 feet into the left field pavilion, wiping out a 2-1 Dodger lead.

But Jansen doesn’t hide. He displays rare accountability in an era when locker rooms are closed and it’s easier than ever for an athlete to avoid questions about why he failed. He deserves credit for that, at least.

A while after the Giants had closed out their 4-2 victory on Wednesday night and regained a two-game lead over the Dodgers in the National League West, Jansen followed starting pitcher Julio Urias into the Zoom session to answer questions about what went wrong. Most relievers, most players period, wouldn’t have come near the camera and microphone under similar circumstances.

“Obviously, it’s not a good one today,” he said. “You know, you just got to shake it off, let it go and get back on that horse tomorrow. That’s pretty much it. … Can’t overthink it. Can’t let it become a mind game. You just got to move on from it. And tomorrow’s a new day. Brand new day.

“… I didn’t get my job done today. I’m going to focus on getting back tomorrow. Like I say, I worked my butt off. And at the end of the day, I’m just going to come out here and compete and help the Dodgers win ballgames, that’s all. So today wasn’t a great day and we’ll move on from that.”

That last part was in response to a question about the boos, which were loud after the home run and far louder when he was removed after giving up another hit and two walks.

Jansen wouldn’t directly discuss the crowd reaction, which makes sense. That’s a no-win situation. But Dodgers manager Dave Roberts did, when asked if the home fans’ reaction to Jansen bothered him.

“It does,” he said. “It does. The fans certainly have a right to voice their frustrations, and absolutely I get that. But I do believe that this guy is born and raised as a Dodger. He cares about the Dodgers, the fan base, and he’s shown that on the field, off the field. And no one hurts more than he does, to be quite honest.

“He’s worked really hard to get back and should have been an All-Star this year. And he’s had a fantastic season. So there was a hiccup the other night (Sunday in Denver, when a ninth-inning lead got away). And to have one at home – he was looking …read more

5 best places for guacamole in the San Fernando Valley