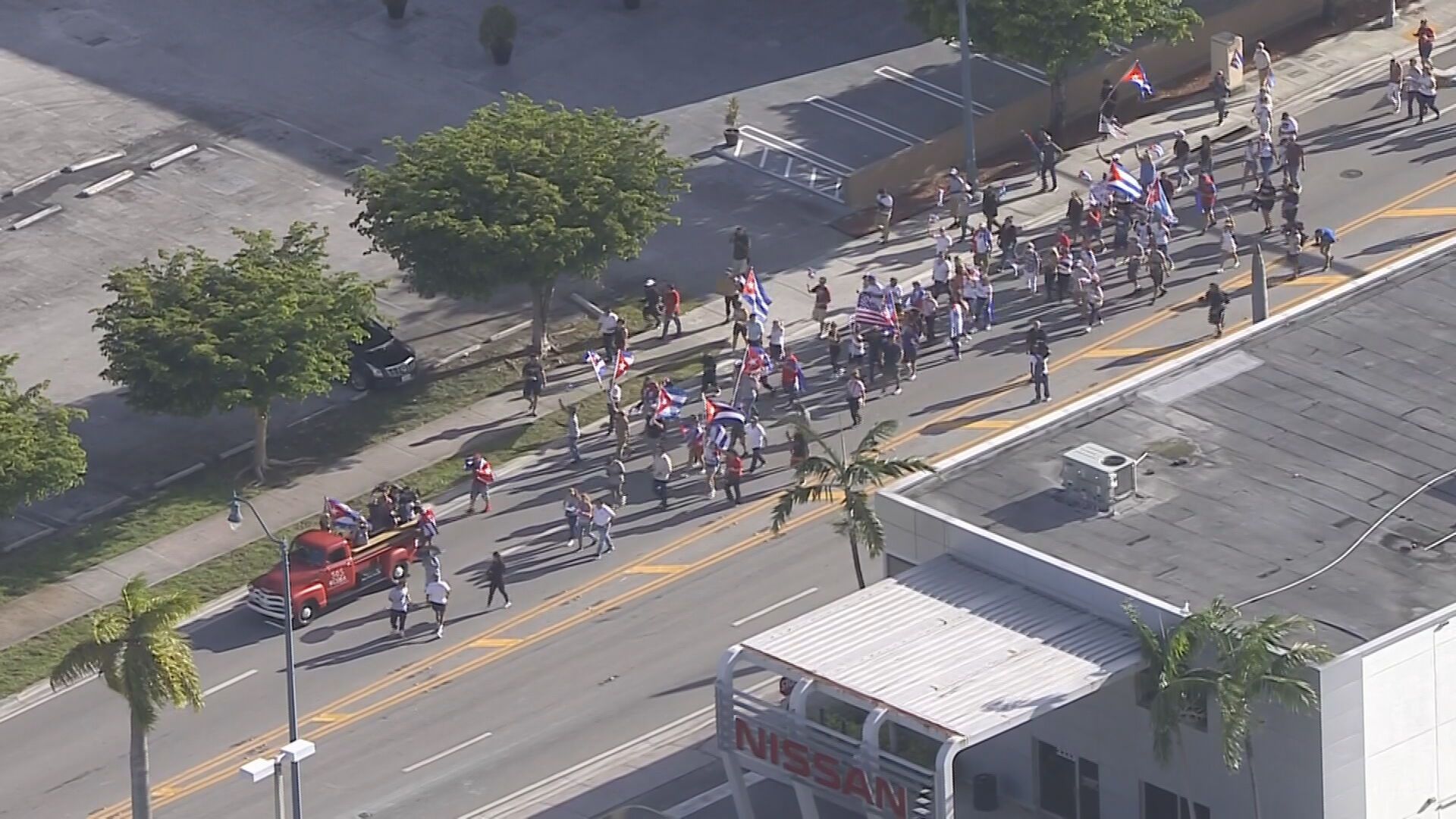 Deep south in Miami-Dade County, among a small group of SOS Cuba protesters, a boy held up a sign Friday night in Homestead to ask U.S. President Joe Biden for military intervention in Cuba. He made it out of cardboard and paint so he could hold it up and show it to drivers Friday night.

Another boy from Miami-Dade stood in front of the White House in Washington, D.C., Friday afternoon, and he said in English that as an American of Cuban descent he was ready to fight for freedom in Cuba. Argelio “Lleyo” Saez, of Hialeah, said he brought an SOS Cuba sign with him that was large enough for Biden to see.

“It is very easy to stand and say we are with you, we want to help you, but if there is no action that takes place by our government, by other governments, the UN — nothing is going to happen,” Salas said.

In Miami Springs, dozens met at the Miami Regional University campus on South Royal Ponciana Boulevard. They wore white T-shirts with a red and blue design with the name of a song that has become the anthem of the SOS Cuba protests in South Florida and the island. “Patria Y Vida,” Spanish for “Homeland and Life.”

Cuban artists wrote it to antagonize communist propaganda that is more than half a century old. It was inspired by the late Fidel Castro’s rallying cry of “Socialism or Death” and the slain “Che” Guevara’s “Homeland or Death” 1964 speech in the United Nations.

Despite internet connectivity problems and power outages, Cubans have been able to share videos with friends and family in South Florida showing authorities’ violent crackdown. Cubans reported beatings, shootings, and raids at the hands of police.

Witnesses fear for their lives. A resident in Havana told a friend in Hallandale Beach that police had shot a protester in the head. An activist in Cardenas said special forces stormed into a family friend’s home and left a pool of blood behind during an arrest.

Cuban Americans in South Florida said they are worried about their families in Cuba. Aside from the violent repression and judicial harassment, they are reporting food and medicine shortages. Relatives say COVID patients in Cuba are dying at home without access to healthcare, and there is plenty of propaganda about the coronavirus vaccines developing in Cuba, but there is a lack of access to the shots.

The historic SOS Cuba protests in cities on …read more