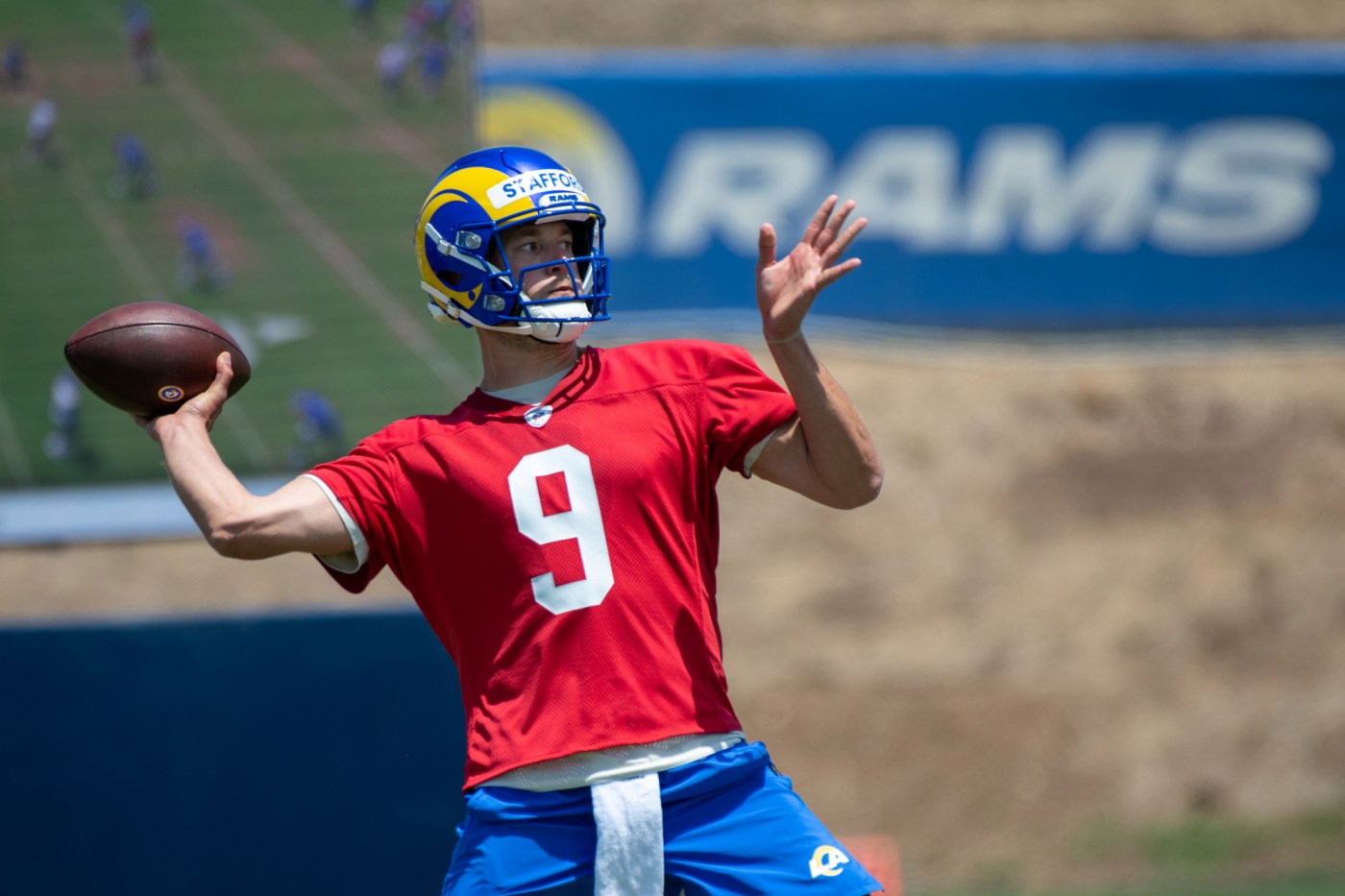 THOUSAND OAKS — It’s speed dating on a gridiron, “The Bachelor” in pads.

The Rams’ pass receivers are competing for the attention of new quarterback Matthew Stafford, intent on making good first impressions during the team’s spring workouts.

Second-year wide receiver Van Jefferson might think he has an edge, having known Stafford since Jefferson’s father Shawn was a Lions coach a decade ago.

“I asked him, ‘Do you remember me then?’ He said, ‘Yeah, I remember you. You were running around in Detroit when you were little,’” Jefferson said. “It’s ironic that our paths crossed again.”

Cooper Kupp has struck up a relationship with Stafford since their families had dinner recently.

“Chemistry, whether you’re talking about playing on the football field and how you’re seeing defenses or being able to sit down and have conversations over dinner, I feel like that stuff kind of plays into each other,” Kupp said.

Robert Woods plans to get Stafford to notice him by using the oldest trick in the book, perpetually telling the quarterback he was open on the last play.

“I always let the quarterback know I was open. You’ve got to stay in his ear, (give) a reminder,” Woods said. “And it’s true.”

But they also realize that who catches the most passes is likely to depend on such football fundamentals as who’s in the right spots at the right times against the wrong defenses.

“Nobody’s doing anything special,” Stafford said after practice Wednesday, laughing at the idea that receivers have been courting him. “I think most guys I’ve been around know I’m going to aggressively take advantage of what the defense is giving me. And on a given play, whether (the pass goes to) Cooper or Rob doesn’t really matter to me.”

Kupp used to be described as Jared Goff’s security-blanket receiver, although Higbee often seemed to fill that role (and, actually, Woods was targeted with the most passes on the team in each of the past three years).

After Goff was traded for Stafford, Kupp said it’s crucial for the receivers and the new quarterback to get timing and communication down.

“There’s no jockeying for attention,” Kupp said. “We’re about winning games. Whoever it takes to win games is what we’re about.”

Stafford’s first impressions of the top five wide receivers? He likes them all, to hear him tell it.

Kupp: “He’s one of the smartest guys I’ve played with,” Stafford said. “His understanding of this offense and what defenses are trying to do is pretty special. As a quarterback, it’s a lot of fun to have a guy out there who’s thinking and seeing the game the same way that you are.”

Woods: “He does a great job of slash running after he catches the football,” Stafford said, calling Woods “a proven player.” “I think he’s really smooth in and out of his breaks.”

Jackson: “DeSean still has the long speed that I see. He’s running great. Does a nice …read more