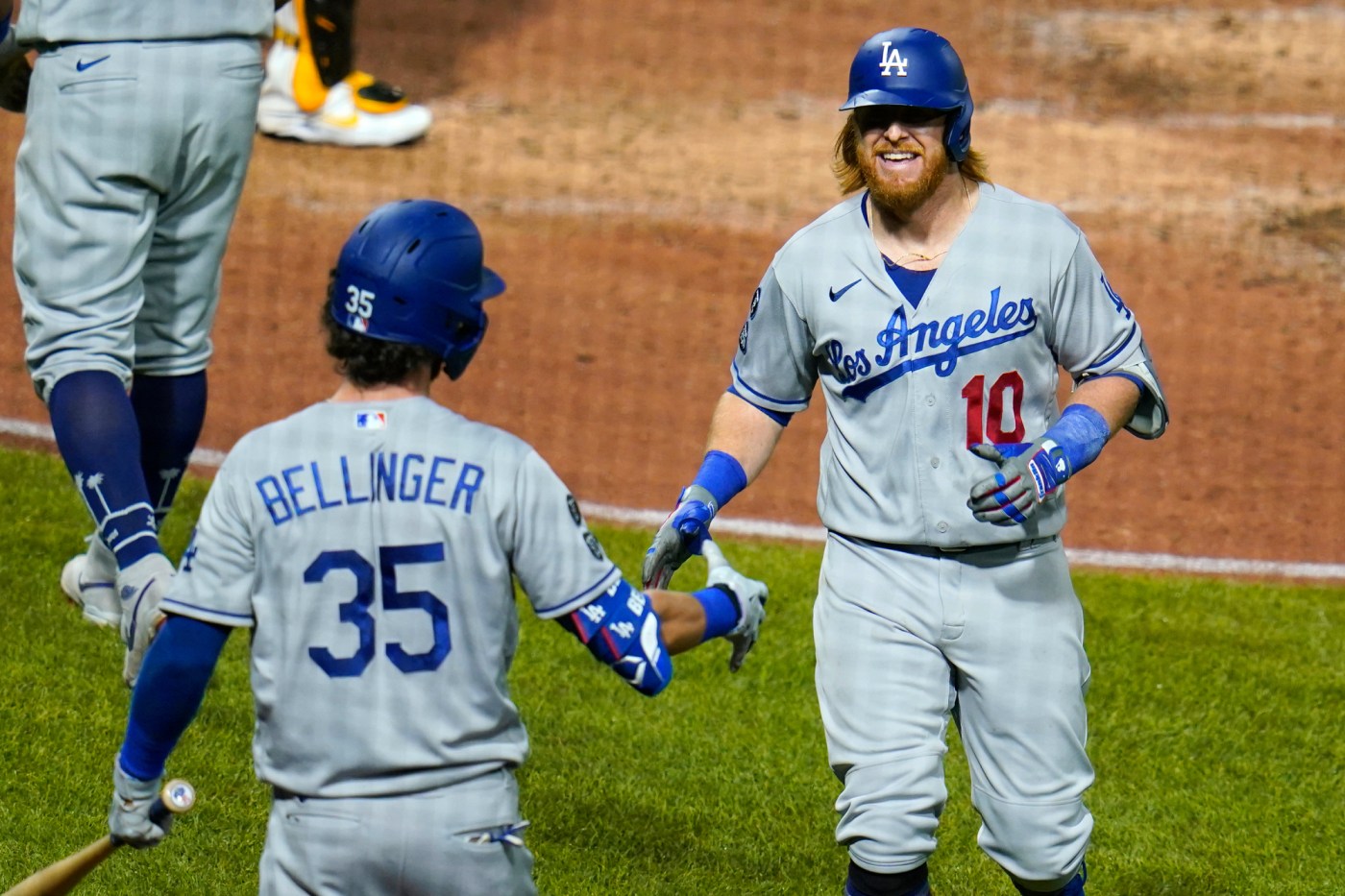 Tony Gonsolin’s 2021 debut was brimming with anticipation. After Dustin May suffered a season-ending elbow injury on May 1, the Dodgers left his place in the starting rotation vacant for a month. A hodgepodge of relief pitchers filled in roughly every fifth game, a difficult strategy to sustain long-term.

The light at the end of the tunnel finally arrived Wednesday. It looked an awful lot like a bullpen game.

The Dodgers escaped PNC Park with a 2-1 victory nonetheless. All it took was six pitchers and two powerful swings by Justin Turner.

Turner hit a solo home run in each of his first two at-bats against Pirates starter Tyler Anderson (3-6). He also singled in the seventh inning, and now has 17 hits in 34 career at-bats against Anderson.

Anderson didn’t allow another run, but the Dodgers’ bullpen was equal to the task after Gonsolin completed only 1 ⅔ innings in his 2021 debut.

Pitching for the second time in as many days, Kenley Jansen recorded the final four outs for his 14th save of the season. He threw three pitches while recording the final out to save Tuesday’s victory, but this one was a bit more challenging. The game ended with Jansen on his behind, having fallen to the ground to snag a scorching line drive by Ke’Bryan Hayes.

After a couple rain delays pushed back Wednesday’s first pitch by more than an hour, Turner smoked a 1-and-1 fastball over the center field fence in the first inning. Three batters into the game, the Dodgers led 1-0.

In the third inning Turner pulled his 11th home run of the season into the left-field corner, where Ka’ai Tom leaped at the fence and nearly pulled it back. The ball bounced out of the webbing of his glove, the cruel difference between a win and a loss determined early.

Trump was concerned that publicly showing 'empathy' in George Floyd case would indicate weakness to political base: book

Gonsolin faced 12 batters, walked five and struck out four. He labored through 66 pitches yet nearly escaped without a run on his ledger. It also could have gone much worse.

With runners on first and second base and two outs in the first inning, Gregory Polanco hit a sharp line drive to first baseman Albert Pujols. At 108 mph, it was the hardest-hit ball in play all night, according to Statcast. Pujols could not react in time and the ball landed in right field for a single.

Second baseman Chris Taylor retrieved the ball in time for a chance to retire Adam Frazier attempting to score. But Dodgers catcher Will Smith received the ball behind home plate, leaving Frazier’s foot plenty of room to slide in safely. The game was tied 1-1.

In the second inning, Gonsolin struck out Ka’ai Tom and Anderson, then walked the bases loaded. Rather than allow the right-hander to face Colin Moran, a left-handed hitter, Manager Dave Roberts summoned left-hander Victor Gonzalez from the bullpen. Gonsolin’s long road back met a quick ending.