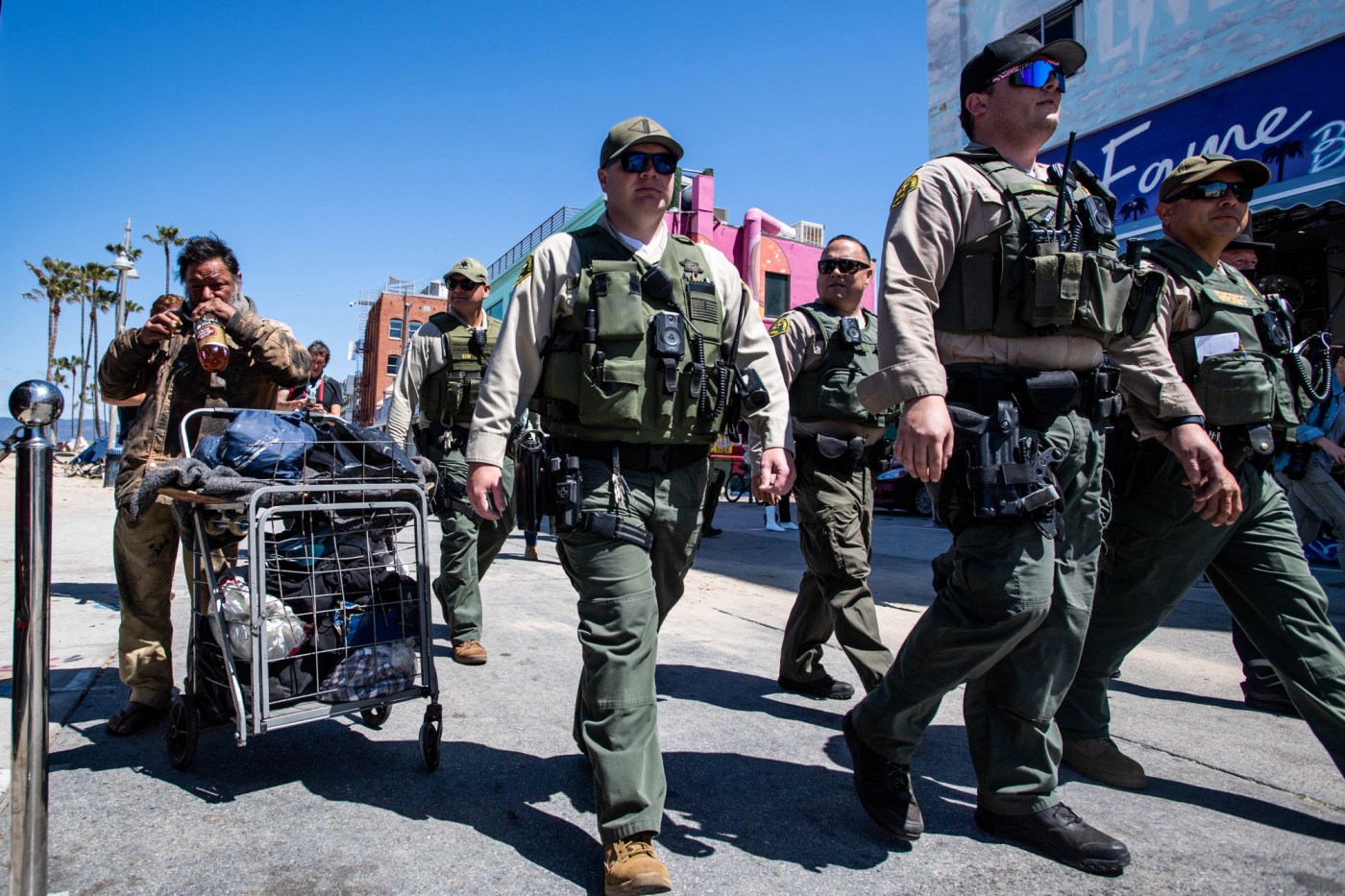 In a move some criticized as “exploiting” the homelessness crisis for political gain, Los Angeles County Sheriff Alex Villanueva sent deputies Tuesday to Venice’s boardwalk to begin to fulfill his pledge to clear the area of homeless encampments by July 4.

Villanueva’s move is unusual since the Los Angeles Police Department has law enforcement jurisdiction over Venice, not the sheriff’s department. Police Chief Michel Moore said he was aware of the sheriff’s efforts in the area and that the two spoke several weeks ago, prior to Villanueva’s first visit to the boardwalk on May 26.

Over the next few weeks, Villanueva plans to use deputies with the department’s Homeless Outreach Services Team to offer resources, including vouchers for temporary shelters through Project Roomkey, to unhoused people living along the Venice boardwalk, the sheriff’s office said.

The sheriff’s department plans to used enforcement, such as arrests, for those who choose not to take the resources offered and decide to remain at the oceanfront area, Moore said, recalling details from his conversation with Villanueva.

Homeless outreach deputies walked throughout the boardwalk Tuesday as the beginning of his removal plan. The sheriff’s department said it will send deputies there again Wednesday.

During a press conference Tuesday, Moore acknowledged the outreach work Los Angeles Councilman Mike Bonin, city workers, and community partners already have been offering to unhoused residents over the past few weeks. In that span, the number of unhoused residents living on the Venice boardwalk has gone down from 240 to 130, Moore said.

Bonin, whose district includes Venice, said he does not welcome Villanueva’s plan to remove the homeless population from the area, calling into question his motivations for the effort.

“Villanueva hasn’t offered actual help,” Bonin said in a statement posted to Twitter. “This is a serious crisis. We need people interested in solving it, not exploiting it.”

He added that the sheriff is exploiting Venice to further the idea “that crime and homelessness are caused by progressives and that the only fix is tougher laws, longer sentences, and more prisons,” which Bonin called a “nefarious lie.”

Peggy Kennedy a homeless advocate with The Venice Justice Committee and L.A. Street Watch said Villanueva is using the situation and capitalizing off anti-homeless bias from some on the Venice community with his reelection in 2022 in mind.

Kennedy, whose group offers legal aid to homeless individuals living in Venice, said using law enforcement in addressing homelessness adds unnecessary pressure and coercion to those living on the streets.

“How is accepting services appropriate when you are offering them under the color of the law with armed officers?” Kennedy said.

Villanueva visited the boardwalk once before in late May and again on Monday, this time surrounded by cameras, saying he wants to understand the homelessness crisis facing the Los Angeles beach community and that he hopes to correct what city leaders have failed to do.