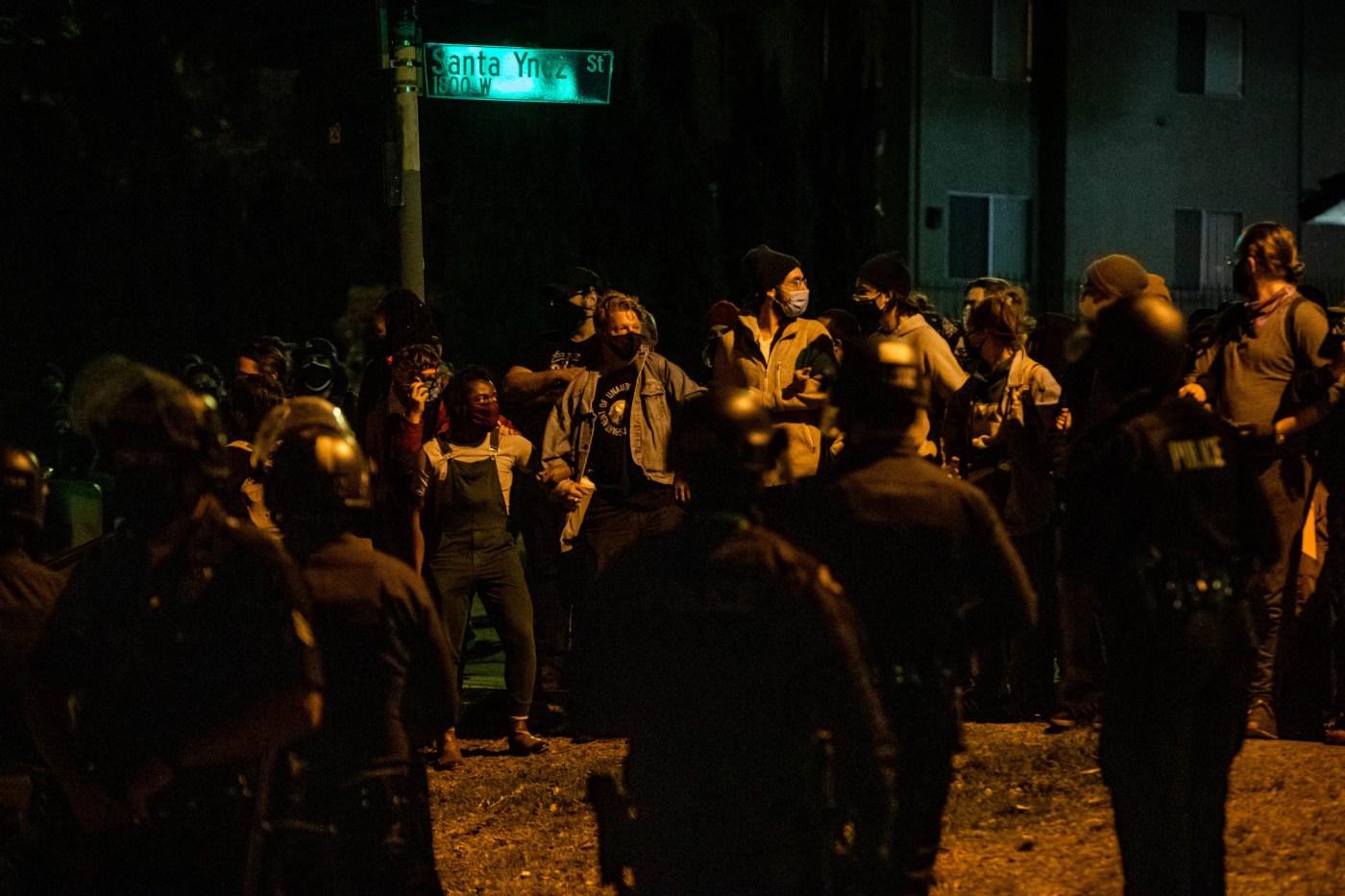 The chief of the Los Angeles Police Department on Tuesday praised the police response to protests around Echo Park Lake two weeks ago that were touched off when the city moved out dozens of homeless people encamped there for about a year.

It left two people injured, saw officers firing less-lethal rounds at some protesters, and led to around 185 arrests, including brief detentions of members of the media.

He was comparing LAPD’s response, which involved lines of officers in riot gear squaring off against several hundred protesters that Thursday night, to the 2020 George Floyd protests that engulfed the city. Those protests and the police response led to a massive lawsuit from activists groups pointing to what they said were numerous, abusive uses of force by police officers swinging batons and firing less-lethal rounds.

Moore said there were far fewer uses of force in the Echo Park Lake protest, necessitated by protesters pulling an officer into a crowd and shining lasers at officers’ eyes. He said protesters who were arrested were held for a few hours in field jails, an improvement over the thousands of protesters swept up and kept zip-tied on busses in last year’s demonstrations.

Activists on the ground, however, continued to point to several reported instances of force used on protesters. Numerous people calling into the police commission on Tuesday criticized LAPD and city officials for the two-day operation.

Some activists who were there Thursday night, the second night of the operation, said they were retreating on Lemoyne Street when dozens of officers ambushed and surrounded them. The night before, on March 24, at a far more peaceful protest, a man told reporters a baton-wielding officer broke his arm.  Videos taken by protesters and bystanders showed officers firing less-lethal rounds from close range at people who didn’t appear to be resisting.

“We’ve been around this circus long enough to know how deeply violent LAPD is,” said Hamid Khan, the founder of the Stop LAPD Spying Coalition, a nonprofit watchdog and civil rights organization and longtime critic of the department, at Tuesday’s virtual police commission meeting.

City officials have said the clearing of the large encampment was successful in housing dozens of homeless people who lived in tents there in a small community that developed over the course of 2020 in the middle of the coronavirus pandemic. But some former residents of the encampment said the deal city workers offered them to be housed immediately wasn’t all that it was advertised to be.

City Councilman Mitch O’Farrell said repeatedly that nearly everyone in the park, some 180 people, were housed by the end of the week. But some former residents have said that instead of being offered immediate placement in Project Roomkey hotels, they were offered shelter space.

Some rejected those placements, and are back on the street or in hotel rooms offered by …read more