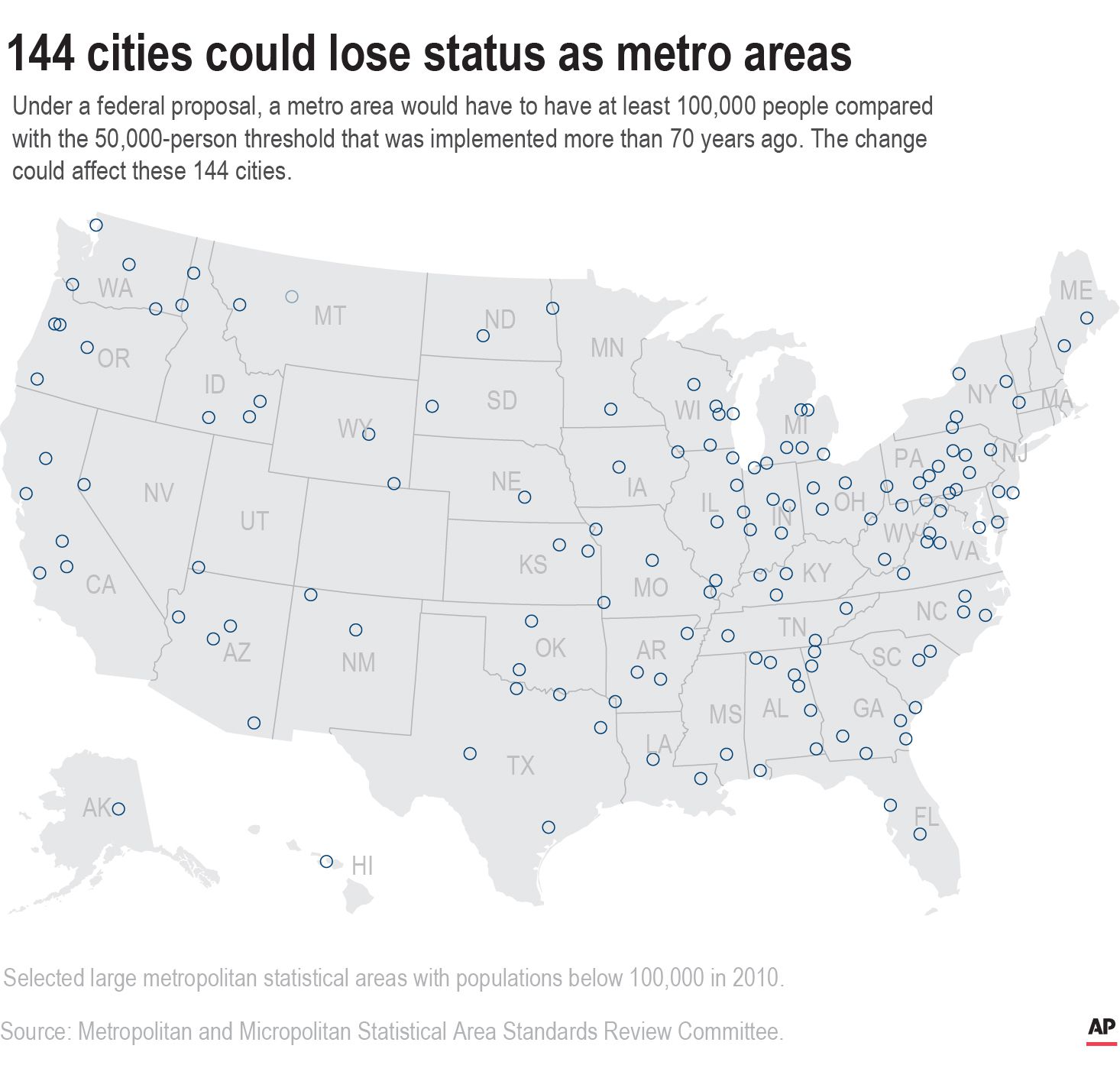 A bipartisan group of U.S. senators and congressmen is urging the federal government not to approve recommendations to remove 144 cities from the designation of metropolitan statistical areas. Reclassifying them as “micropolitan” would put key federal funding at risk, they said.

The request comes after The Associated Press reported this month that the federal government is contemplating raising the population criteria for core cities in metro areas from 50,000 residents to 100,000 residents. Doing so would reclassify more than a third of the current 392 metro areas as micropolitan statistical areas.

Officials in some of the affected cities worry that the change could have adverse implications for federal funding and economic development, since some housing, transportation and Medicare reimbursement programs are directed specifically to metropolitan statistical areas.

“Adhering to this recommendation has the potential to harm communities across the nation, which we hope you take into account while considering these recommendations,” said the letter sent last week by eight U.S. senators and two U.S. representatives to the Office of Management and Budget.

The letter was signed by senators John Thune and Mike Rounds of South Dakota, Kevin Cramer and John Hoeven of North Dakota, Cynthia Lummis of Wyoming and Deb Fischer of Nebraska, all Republicans, along with Arizona’s two Democratic senators, Kyrsten Sinema and Mark Kelly. Also signing were Republican Reps. Dusty Johnson of South Dakota and Adrian Smith of Nebraska.

In a separate letter to the Office of Management and Budget, Hoeven said the proposal also would hurt micropolitan areas that were on the cusp of becoming metro areas. If approved, it wouldn’t take effect until 2023.

Kings have chance to head into All-Star break atop division

Statisticians who recommended changing the definition of a metro area say it’s long overdue, given that the U.S. population has more than doubled since the 50,000-person threshold was introduced in 1950. Back then, about half of U.S. residents lived in metros; now, 86% do.

Scores of city leaders and rural researchers also have written, urging the Office of Management and Budget to reject the proposal.

The city manager of Mankato, Minnesota estimated that her community would lose directly $400,000 in funding that goes toward homeless shelters, affordable housing and medical care to the uninsured. This federal funding also leverages other other low-income housing projects, said Susan Arntz.

“The City of Mankato, Minnesota is very troubled by the proposal to modify the standards,” Arntz said in a letter.