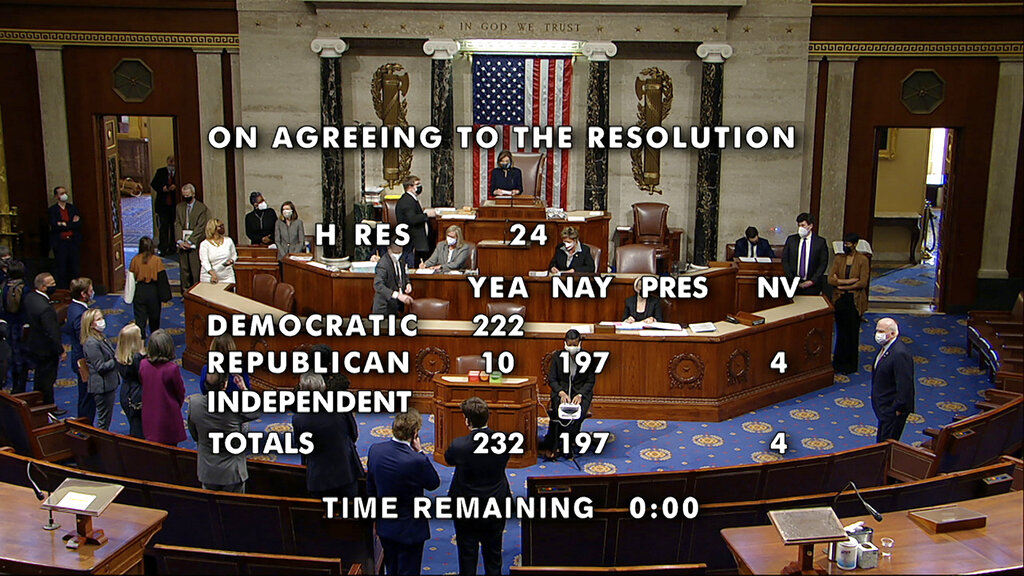 WASHINGTON — President Donald Trump’s impeachment trial could begin on Inauguration Day, just as Democrat Joe Biden takes the oath of office in an ever-more-extraordinary end to the defeated president’s tenure in the White House.

The timing is not set and depends heavily on when House Speaker Nancy Pelosi decides to transmit the article of impeachment to the Senate. Democrats hoping to avoid interrupting Biden’s inauguration have suggested holding back until the new president has a chance to get his administration going.

In this image from video, the final vote total of 232-197 to impeachment President Donald Trump over the violent siege of the Capitol, after voting on the House floor Wednesday, Jan. 13, 2021, on Capitol Hill in Washington. (House Television via AP)

WASHINGTON, DC – JANUARY 13: Speaker of the House Nancy Pelosi (D-CA) raps her gavel after the House voted to impeach U.S. President Donald Trump for the second time in little over a year in the House Chamber of the U.S. Capitol January 13, 2021 in Washington, DC. The House voted 232-197 to impeach Trump on the charge of “incitement of insurrection” after a mob attacked the U.S. Capitol where Congress was working to certify the Electoral College victory of President-elect Joe Biden on January 6. 10 Republicans voted to impeach. (Photo by Chip Somodevilla/Getty Images)

What is clear is that the trial will be unlike any other in the nation’s history, the first for a president no longer in office. And, politically, it will force a reckoning among some Republicans who have stood by Trump throughout his presidency and largely allowed him to spread false attacks against the integrity of the 2020 election.

“The only path to any reunification of this broken and divided country is by shining a light on the truth,” said Rep. Madeleine Dean, D-Pa., who will serve as an impeachment manager.

Trump was impeached Wednesday by the House over the deadly Capitol siege, the only president in U.S. history twice impeached, after a pro-Trump mob stormed the building. The attack has left the nation’s capital, and other major cites, under high security amid threats of more violence around the inauguration.

Senate Republican leader Mitch McConnell is open to considering impeachment, having told associates he is done with Trump, but he has not signaled how he would vote.

The Republican leader holds great sway in his party even though convening the trial will be among his last acts as majority leader. Two new senators from Georgia, both Democrats, are to be sworn into office leaving the chamber divided 50-50. That tips the majority to the Democrats once Kamala Harris takes office, as the vice president is a tie-breaker.

No president has ever been convicted in the Senate, and it would …read more