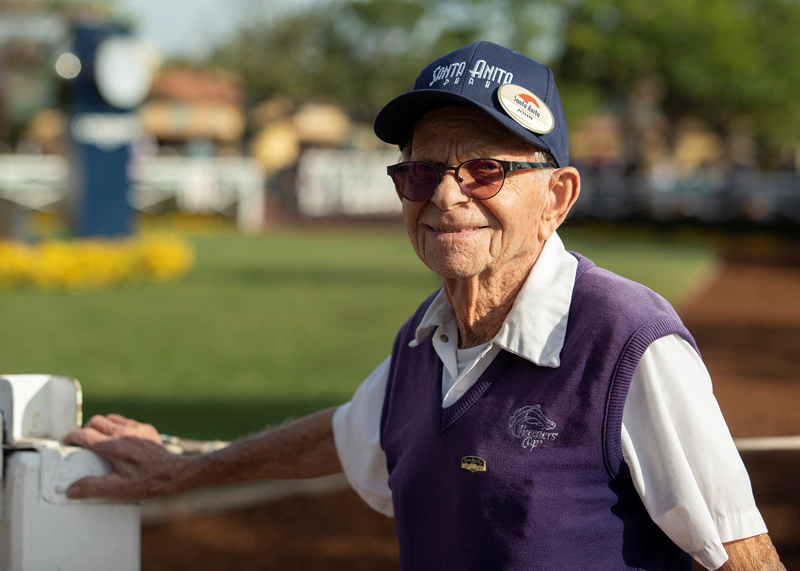 You’re not going to get John Shear, affectionately known as Santa Anita’s “Paddock Captain,” to stick out his chest and exclaim with pride Sunday, “I’m 100 years old today!”

It’s not going to happen.

“It’s just the same as 99. It’s just another year,” Shear said Thursday during a telephone interview as he prepared to celebrate a momentous birthday with his wife of 56 years, Diane, and their 54-year-old son, Michael, while watching the Santa Anita races on TV from their Sierra Madre home.

There will be a cake, some friends might drop by, and Santa Anita, the track that has employed him since 1961, is naming a race in his honor. But to Shear, the man who was doing 35 pushups a day when he was 90, it will be just like any other day.

“I pay no attention to time,” he said. “I just keep working until they tell me to go home. I’m happy, I’m glad I can (still) work. I enjoy myself.”

It’s no surprise then when you hear Shear downplay the century mark, especially after he selflessly put his own life in danger nearly 10 years ago by jumping in front of a runaway horse outside Santa Anita’s Seabiscuit Walking Ring to save a 5-year-old girl from being trampled.

The girl, Roxy Key, who Shear emotionally reunited with two years later, was miraculously unharmed. Shear, also referred to as “Little John” because of his 4-foot-11 frame, was rushed to Huntington Memorial Hospital in critical condition with several fractures throughout his body and remained there for seven weeks.

What makes the story even more heartwarming is Shear says he’d do the same thing all over again.

“I believe that I’ve (already) had a life, and that little child hadn’t,” Shear said. “I believe that if I can save somebody, let them carry on with their life, that’s important to me.”

Shear was born and grew up in London, migrated to Canada shortly after World War II and found his way to Southern California to become an exercise rider in 1954. He’d always wanted to be a jockey and he even rode in a few races as an apprentice in England, but he never won a race.

He eventually shelved the wish to join the ranks of legendary riders Johnny Longden and Eddie Arcaro, and later took on the role of hero. Key’s father, Michael, told ESPN during the 2013 reunion that his daughter would be dead if not for Shear.

But here’s the best part: Despite his age, Shear intends to return to Santa Anita and resume his post when the coronavirus passes and fans are allowed to attend the races again.

“I miss it a lot,” he said. “I love the race track and I like the people that I worked with all the time. Missing them hurts me more than anything. The (pandemic) hurts me because you can’t see your friends, and I’m just hoping that it goes away and everything goes back to normal.”