Rams’ Aaron Donald wants to put the hurt on Packers 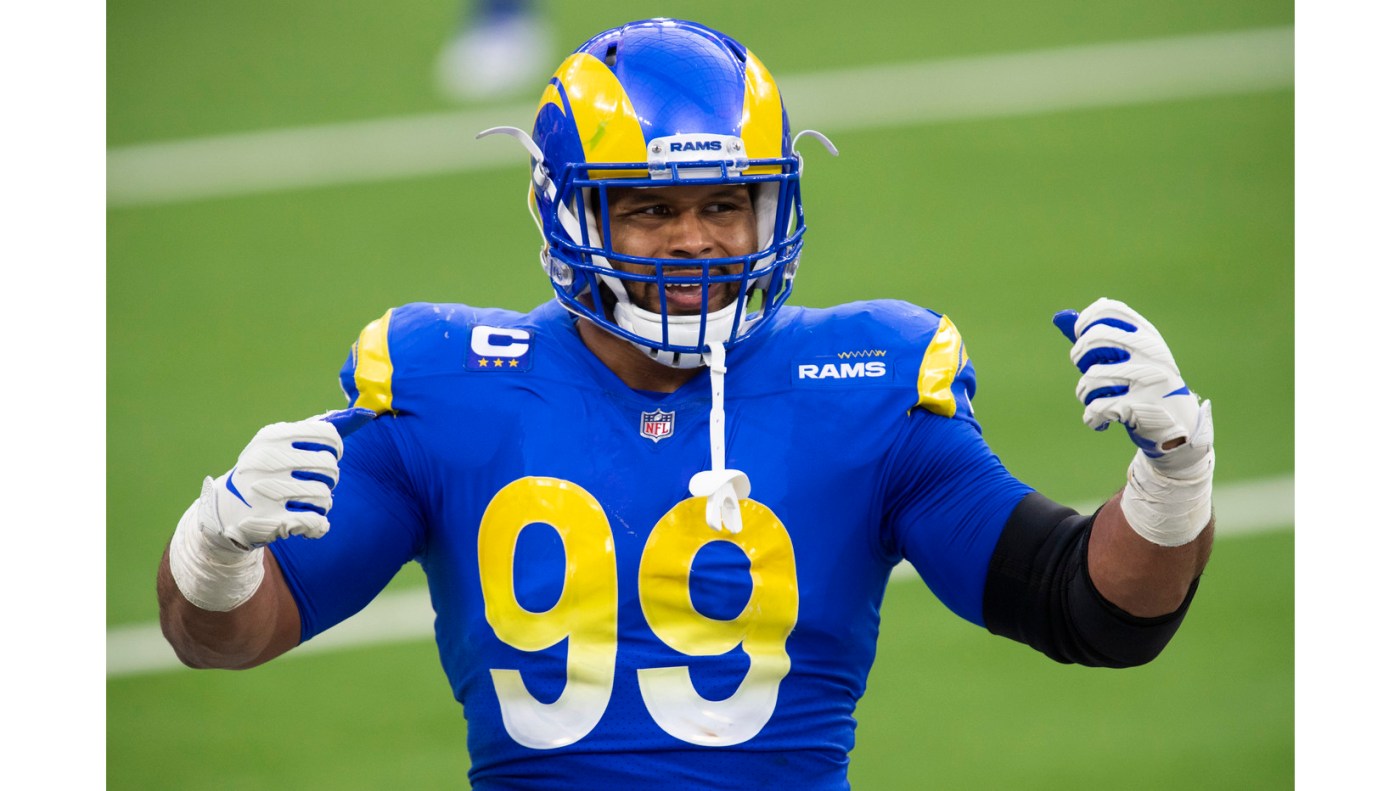 THOUSAND OAKS — Aaron Donald hasn’t missed a game because of injury in his NFL career with the Rams, and didn’t miss one in his college career at Pitt.

He doesn’t plan to start missing any now, with the Rams going into a second-round playoff game against the Green Bay Packers on Saturday at Lambeau Field.

After missing a chunk of the Rams’ victory over the Seattle Seahawks, the defensive tackle whom Coach Sean McVay has begun to call “the Terminator” says he’ll be back.

If it’s all true, that’s great news for the Rams’ league-leading defense, which is getting ready to face the NFL’s highest-scoring offense, led by top-rated quarterback Aaron Rodgers.

The Rams’ practice report listed him as a non-participant in practice for the second day in a row.

Coach Sean McVay said resting Donald is about being “smart” with him, same as the team is doing while waiting to see the status of quarterback John Wolford (neck), wide receiver Cooper Kupp (knee), left guard David Edwards (Achilles) and linebacker Terrell Lewis (ankle), all of whom were out of practice Wednesday.

“Unless something unforeseen happens, the Terminator will be ready,” McVay said Tuesday.

The Rams have been calling it simply a rib injury. Asked for specifics on Wednesday, Dr. Donald offered this diagnosis: “My damn side is sore. I’m good.”

He said he was able to work out in the Rams’ weight room and had “no pain.”

It wasn’t like that Saturday when Donald stayed down on a knee after hitting Russell Wilson as the Seahawks’ quarterback threw an incomplete pass in the third quarter of the Rams’ 30-20 victory. Donald clutched his right side, left the field and walked to the locker room with medical personnel. He returned to the sideline briefly but didn’t go back into the game.

Donald said Wilson fell on him, and he thought he had the wind knocked out of him.

“I was going to come back until they got that last touchdown,” Donald said of the Jared Goff-to-Robert Woods pass play that gave the Rams a 17-point lead with 4:46 to play. “That kind of put it away. It was ‘Let’s rest up for next week.’”

Donald, 29, has missed two games in his seven NFL seasons, both in 2017. He missed that year’s opener amid a contract holdout and was rested for the meaningless regular-season finale.

Seeing him injured was a shock to teammates.

“It was just like, dang! You didn’t know Superman could get hurt,” defensive end Michael Brockers said Wednesday.

The Rams will say something stronger than dang if Donald is impaired Saturday. There’s no replacing the franchise’s first six-time first-team All-Pro. That’s true even though the defense hung in there with him out, holding Seattle to a futile late touchdown, linebacker Leonard Floyd sacking Wilson twice, and defensive tackle A’Shawn Robinson recording season highs for defensive snaps (33%) and tackles …read more