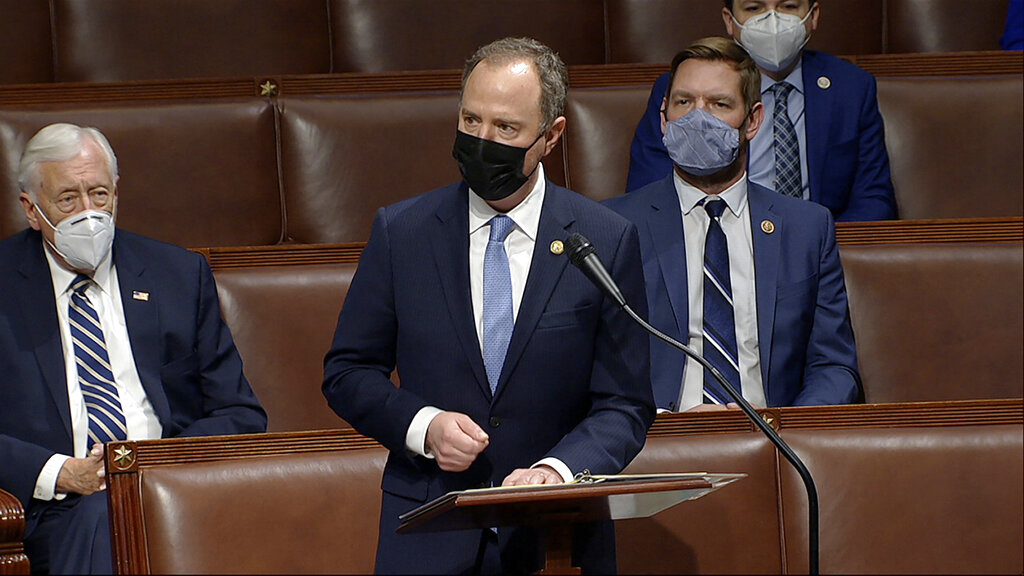 A year ago Wednesday, Rep. Adam Schiff was gearing up for the battle of his political life.

President Donald Trump had just been impeached in the House, and Schiff was preparing for marathon arguments in the Senate chamber, where he would lead the case to convict the president and remove him from office.

The rest is American history: Conviction failed — and a year like no other ensued: A pandemic killed hundreds of thousands in the U.S. The death of George Floyd set off  a massive social justice movement. A disputed election fractured an already fractured nation. And then, after weeks of relentless claims the election was “stolen,” a rally that morphed into a deadly mob assault on Congress brought the nation full circle.

Impeachment had seemed part of a past long ago. Until Wednesday, that is, when Schiff and 231 of his House colleagues — including some Republicans — registered their votes to impeach the president a second time.

“I guess my reaction is more sadness over what he’s put the country through,” said Schiff, after reflecting on the national political storm of the last year.

Did he ever think it would come to a second impeachment?

“I remember making a point during the trial….I thought the chances he would go on to try and cheat again were 100%. Not 10, not 50 but 100%. So it was all too predictable we would be back here again. We were not going to change this president.”

“With only a few days left in the Trump Administration, the vote to impeach the President is no more than political theater that runs the risk of further dividing us at a time when we need to come together,” the Republican said in a statement following his vote against impeachment. “I urge my colleagues on both sides of the aisle to stop playing political games and start advancing good policy solutions.”

Garcia was adamant about moving forward in a bipartisan way: “The only way we can do this is to move forward together as one nation,” he said.

Just miles away from Garcia’s district, House Minority leader Kevin McCarthy, R-Bakersfield, decried the violence and the loss of lives during the riot as “tragic.”

“A vote to impeach would further divide this nation,” McCarthy said. “A vote to impeach will further fan the flames of partisan division,” he argued, while at the same time saying the president bore responsibility for last week’s Capitol breach.

“Our country is deeply hurt,” he said.