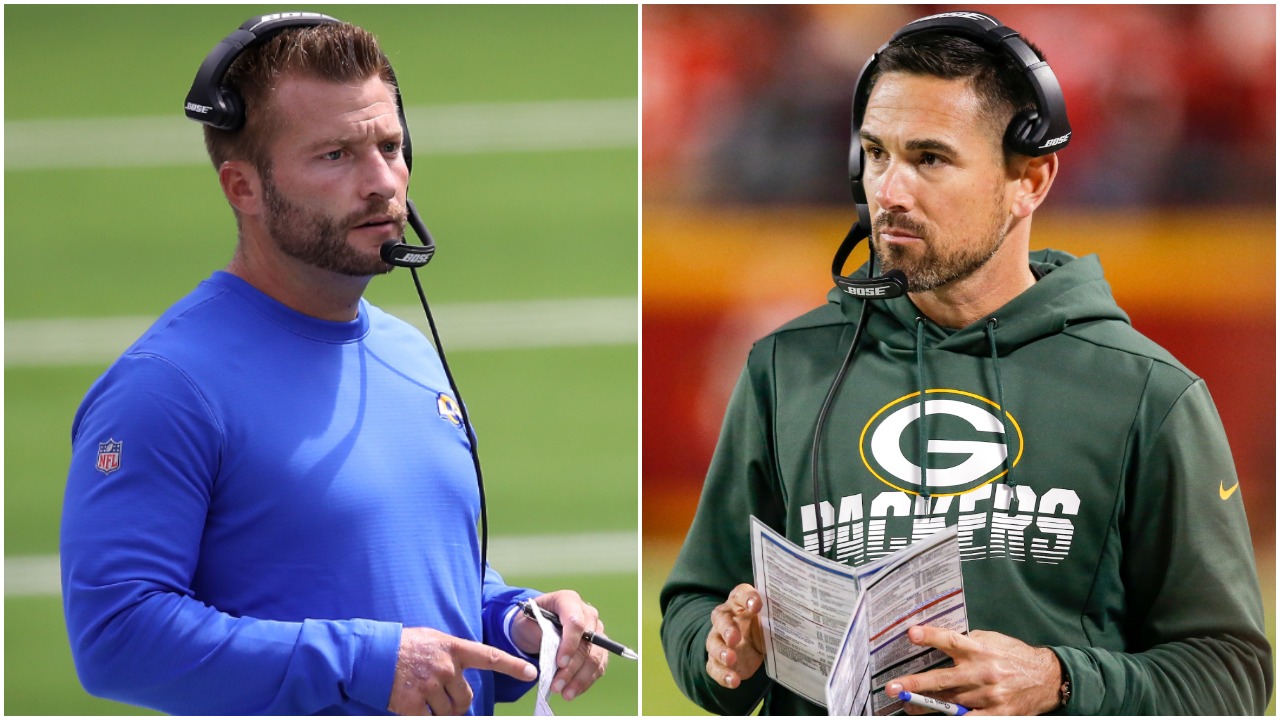 Sean McVay and Matt LaFleur have sweet memories of their year together with the Rams. The winning football. The friendship. The fun.

They can laugh now about the times McVay, the Rams’ coach, and LaFleur,  the team’s offensive coordinator in those days, argued over the finer points of game plans.

“You know, he and I never battled each other. Ha! Just kidding. Every day was a battle,” LaFleur said Tuesday in a video chat with reporters. “That’s what’s fun about this, though. You can challenge each other, and that’s how you grow.”

“He always has the right approach as far as being honest,” McVay said later in the day. “It wasn’t one of those ‘tell you what you want to hear.’ He told me what I needed to hear. It was good, even though sometimes we wanted to choke each other out.”

Saturday, McVay and LaFleur will battle across the width of the Lambeau Field gridiron when the Rams face the Green Bay Packers in the second round of the NFL playoffs.

Both head coaches now, they’ll be on the same field for the first time since LaFleur’s one year helping McVay run the Rams’ offense in 2017, which followed their four seasons together as Washington assistants.

LaFleur left the Rams for the chance to call plays himself as the Tennessee Titans’ offensive coordinator, and he quickly stepped up again in 2019 to run the whole show as the Packers’ coach.

Other than New England’s Bill Belichick, the highest regular-season winning percentages among current NFL coaches belong to LaFleur (26-6, .813) and McVay (43-21, .672).

Each remembers realizing quickly that the other was head coach material.

What is a deepfake? Everything you need to know about the AI-powered fake media

The day in 2010 when McVay, then 24, interviewed with Mike and Kyle Shanahan for a job as Washington’s assistant tight ends coach, LaFleur, then 31, was in an adjacent office as the NFL team’s quarterbacks coach and impressed by what he overheard.

“Just the excitement and enthusiasm and energy he had in his voice,” LaFleur remembered. “And then you get to sit down with him.

“You knew quite quickly that he was destined to be a head coach in this league.”

They became fast friends. They lived across the street from each other in Washington. McVay, who hadn’t met his fiancee yet, would have dinner at the home of LaFleur and his wife, BreAnne.

McVay hired LaFleur away from the Falcons after becoming the Rams’ coach four years ago this week. LaFleur deserves a share of the credit for taking the Rams from 32nd in the league in scoring in 2016 to first in 2017. And for quarterback Jared Goff’s rapid improvement in his second season.

“It was a great match,” Rams wide receiver Robert Woods said Tuesday of McVay and LaFleur. “High-energy guys, competitive practices. But really just pushing our offense to be the top offense.”

How important a subplot will their coaching battle be in the game between the top-seeded Packers (13-3 in the regular season) and the sixth-seeded Rams (10-6)?