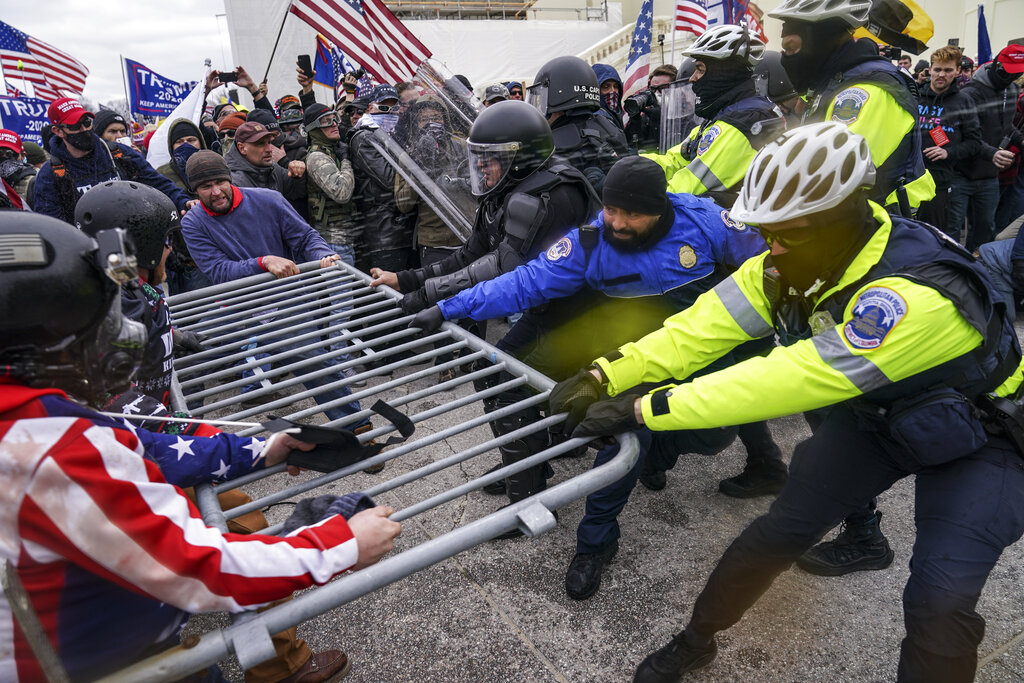 This week, the FBI confirmed what experts who study violent extremism and domestic terrorism have said they feared since rioters breached the U.S. Capitol — continued violence before and after President-elect Joe Biden’s inauguration.

With a week to go before Biden takes his oath of office, the FBI is warning of plans for armed protests at all 50 state capitals and in Washington, D.C., in the days leading up to the Jan. 20 inauguration. An internal FBI bulletin warned that nationwide protests may begin later this week and extend through Biden’s inauguration and that extremist groups are likely to play a role in these demonstrations.

“It’s going to get worse after that,” said Pete Simi, an associate professor of sociology at Chapman University who has studied violent extremism, especially White supremacist groups, for more than two decades.

Any time there is a major, violent event such as the Jan. 6 riot, which some say was a coordinated assault on the Capitol to disrupt legislators who were counting electoral votes to certify Biden’s presidential win, there is the likelihood of more attacks occurring in a planned manner, Simi said.

Five people, including a Capitol police officer and a San Diego-area woman who was among the rioters, died as a result of the clash. Another veteran member of the Capitol police died by suicide three days after the riot. Federal and local law enforcement officials have vowed to track down rioters seen in social media posts and news coverage swarming over the Capitol, breaking doors and windows and fighting with police.

Many who showed up on Jan. 6 to hear Trump speak near the White House before a planned march to the Capitol may not have intended to incite or participate in the violence that ensued, but those who were leading the mob are established figures in far-right extremist movements, Simi said.

He gave the example of Baked Alaska, whose real name is Tim Gionet, a well-known neo-Nazi, anti-Semitic conspiracy theorist and social media personality, who livestreamed the riot to his 16,000 followers on Dlive, a streaming app that is gaining in popularity among right-wing extremists. Gionet had also marched alongside white nationalists in the Unite the Right rally in Charlottesville, Virginia in August 2017.

“(Gionet) not only livestreamed the riot, but he made money doing it,” Simi said, adding that there was a strong showing from several other neo-Nazi groups at the Capitol.

“There was a Camp Auschwitz T-shirt, Confederate flags, neo-Nazi tattoos,” he said.

Trump supporters try to break through a police barrier, Wednesday, Jan. 6, 2021, at the Capitol in Washington. As Congress prepares to affirm President-elect Joe Biden’s victory, thousands of people have gathered to show their support for President Donald Trump and his claims of election fraud.(AP Photo/John Minchillo)

Rep. Andy Kim, D-N.J., helps ATF police officers clean up debris and personal belongings strewn across the floor of the Rotunda in the …read more

A 5/1 ARM is a mortgage that locks in your rate for the first 5 years, then changes it once per year

‘Stocks have the green light’: Guggenheim’s Minerd says massive stimulus will support equities at least through the end of the 1st quarter