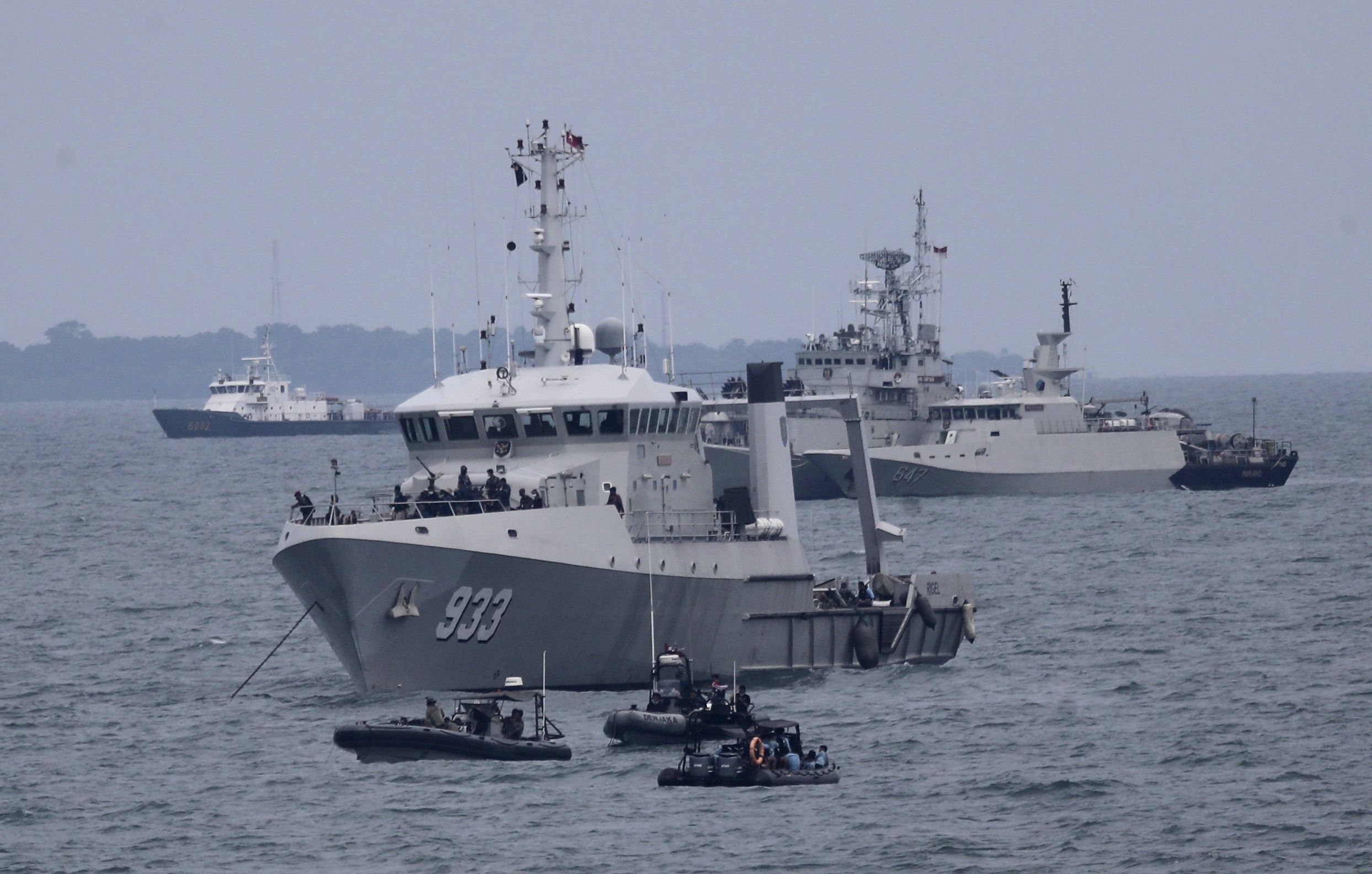 Indonesian navy divers were searching through plane debris and seabed mud Tuesday looking for the black boxes of a Sriwijaya Air jet that nosedived into the Java Sea over the weekend with 62 people aboard.

A navy ship earlier picked up intense pings being emitted from the boxes containing the cockpit voice and flight data recorders of the Boeing 737-500 that went down Saturday minutes after taking off from the capital, Jakarta, in heavy rain.

The divers were using high-tech “ping locator” equipment to further narrow their hunt beneath 20 meters (65 feet) of seabed mud but the black boxes are buried under tons of sharp objects in the wreckage, Navy Chief Adm. Yudo Margono said.

He said removing those obstacles was slowing efforts to reach the devices. A remote-operated vehicle was sent to the black box location, and Margono said at least 160 divers will be deployed Tuesday to boost the search for the black boxes.

More than 3,600 rescue personnel, 13 helicopters, 54 large ships and 20 small boats have joined the search that already has found parts of the plane and human remains in the water at a depth of 23 meters (75 feet).

Anguished family members have been providing samples for DNA tests and police say results are expected within 4-8 days.

National Police spokesman Rusdi Hartono said about 53 samples for DNA testing have been collected but more are still needed, especially from parents and children of victims.

What is estate planning? A strategy to safeguard your family and your finances, and ensure your plans for them get carried out as you wish

The information contained in the black boxes will be key to learning what downed Flight 182. The devices detached from the tail of the aircraft when it crashed, and the search for them is concentrated between Lancang and Laki islands in the Thousand Island chain just north of Jakarta.

When found, the devices will be handed to the National Transportation Safety Committee, or NTSC, overseeing the crash investigation.

Indonesia’s NTSC said Singapore’s Transport Safety Investigation Bureau will help in searching for the black boxes and the United States’ National Transportation Safety Board will join in investigating the crash.

The NTSC chairman, Soerjanto Tjahjono, ruled out a possible midair breakup after seeing the condition of the wreckage found by searchers. He said the jet was intact until it struck the water, concentrating the debris field, rather than spreading it out over a large area as would be seen with a midair event.

The disaster has reignited concerns about safety in Indonesia’s aviation industry, which grew fast after the economy was opened following the fall of dictator Suharto in the late 1990s. The United States had banned Indonesian carriers from operating in the country in 2007, lifting the action in 2016, citing improvements in compliance with international aviation standards. The European Union lifted a similar ban in 2018.

In the past year, Indonesian aviation was affected significantly by the coronavirus pandemic that caused travel restrictions and …read more

Humana just launched its answer to the new crop of insurer start-ups in the red-hot health plan market for seniors.

The 14 best online courses and apps to learn and speak Japanese, according to a fluent speaker