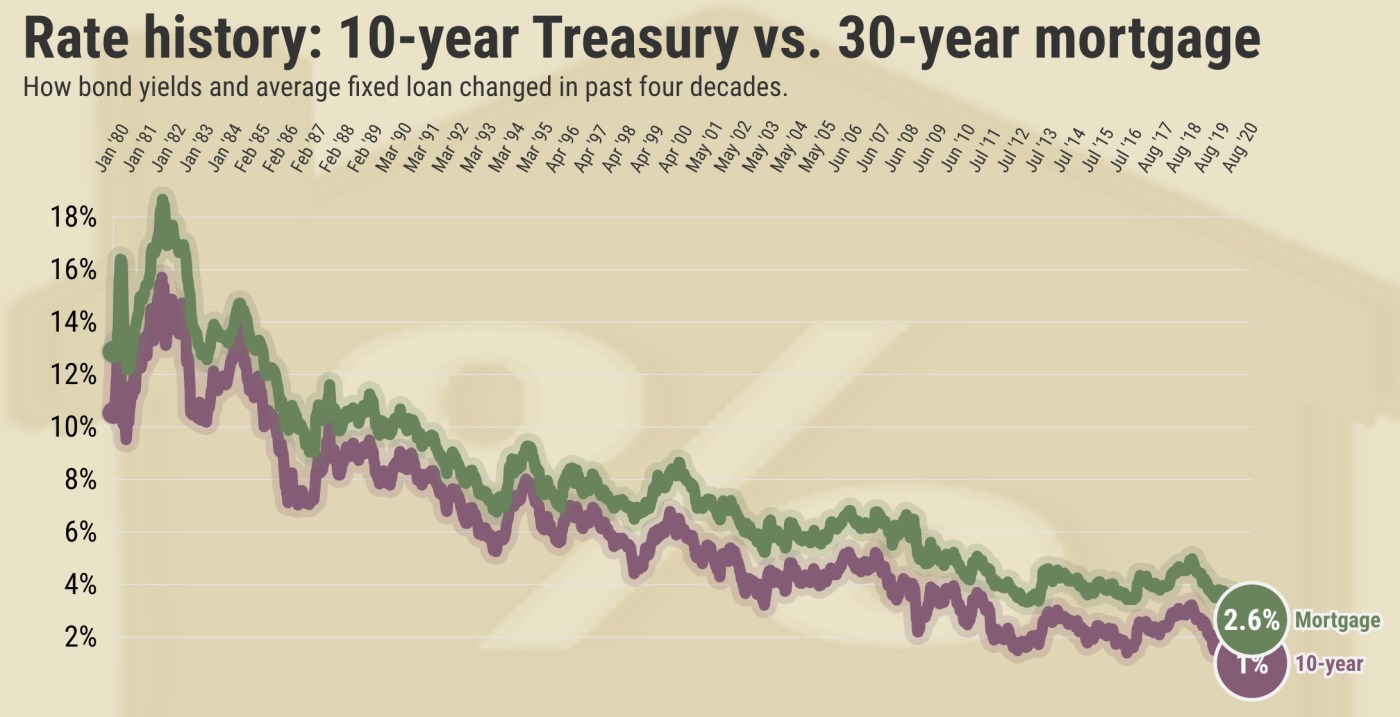 “Bubble Watch” digs into trends that may indicate economic and/or housing market troubles ahead.

Buzz: A widely watched 10-year Treasury rate started the new year by jumping to a 10-month high. That upswing suggests that mortgage rates — which oddly fell to another record low — could soon turn higher and become a big drag on homebuying.

In the week ending Jan. 8, the 10-year bond rate continued its late 2020 surge by hitting 1% — up from last year’s low of 0.55% in August. This is the highest 10-year rate since March when the coronavirus began wreaking health and economic havoc.

The mortgage benchmark started the new year by falling to 2.65% — the 17th record low set since the pandemic upended the economy. Curiously, rates are down from 2.88% in August when the 10-year rate bottomed.

There’s no doubt the economy and housing last year needed a tonic of historically cheap money as efforts to stem the spread of coronavirus throttled the economy.

Forget all the debate over various stimulus programs — direct checks to citizens, extra unemployment benefits and business grants and loans — a huge factor in the economic rebound has been the Fed’s efforts to push the cost of lending down. Central bankers cut the rates they control while also buying debts in financial markets, including more than $2 trillion in mortgages.

Add in regulators’ generous financial safety nets created for borrowers who can’t make house payments and you have what adds up to a huge housing bailout.

And it’s working. Just look at homebuying in California.

And soaring prices didn’t deter house hunters who boosted sales 26% in the year, the biggest increase in 11-plus years.

But as 2021 starts, there seems to be a disconnect between the relative upbeat thinking of financial markets (look at the rising 10-year yield) vs. the dour outlook of the Fed (look at cheaper mortgages). Remember, interest rates move opposite of economic progress — rates typically rise during improving economies and fall when things look worrisome to bleak.

Sign up for The Home Stretch email newsletter filled with hot housing news from around the region! Subscribe here.

So we’re living through a rate rarity, if not a touch of insanity. Since 1980, when the 10-year Treasury rate rose over a five-month period, mortgages fell just 8% of the time. And over those 40 years, record lows were set after bond yields were rising just 3% of the time.

Yes, the pandemic era is a one-of-a-kind headache, economically speaking. Keeping mortgage rates low to boost homebuying makes sense as it’s an economic niche that can help the economy pull out of a funk.

But have the central bankers provided too much housing help?