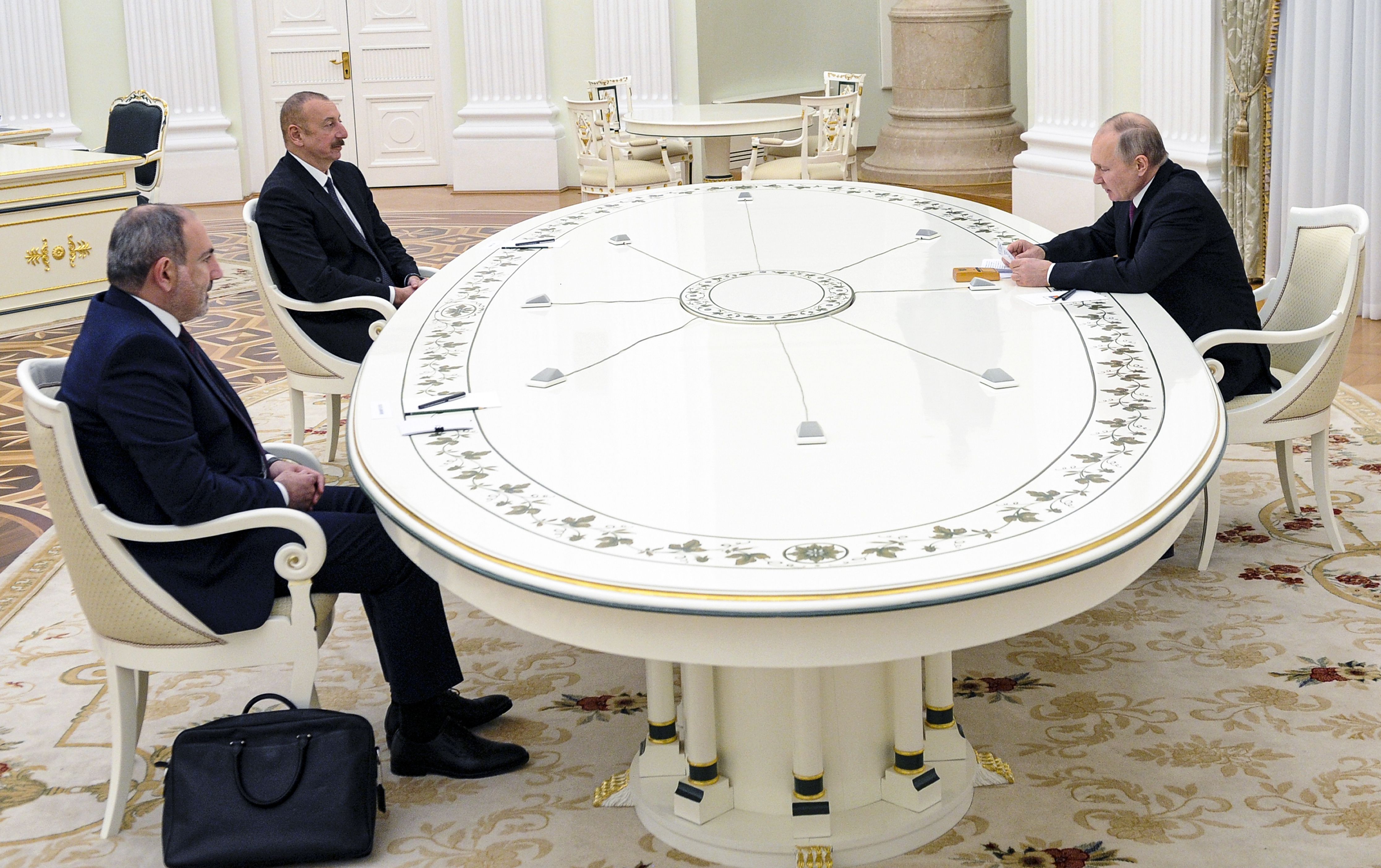 Russian President Vladimir Putin on Monday hosted his counterparts from Armenia and Azerbaijan, their first meeting since a Russia-brokered truce ended six weeks of fighting over Nagorno-Karabakh.

As he sat down for talks in the Kremlin with Azerbaijani President Ilham Aliyev and Armenian Prime Minister Nikol Pashinyan, Putin said that the peace agreement has been successfully implemented, “creating the necessary basis for a long-term and full-format settlement of the old conflict.”

The Nov. 10 peace deal ended 44 days of hostilities in which the Azerbaijani army routed Armenian forces and reclaimed control over large parts of Nagorno-Karabakh and surrounding areas.

Nagorno-Karabakh lies within Azerbaijan but had been under the control of ethnic Armenian forces backed by Armenia since a separatist war there ended in 1994. That war left Nagorno-Karabakh itself and substantial surrounding territory in Armenian hands.

Hostilities flared up in late September and the Azerbaijani military pushed deep into Nagorno-Karabakh and surrounding areas in six weeks of fighting involving heavy artillery and drones that left more than 6,000 people dead on both sides.

Under the peace deal, Russia has deployed about 2,000 peacekeepers to Nagorno-Karabakh for at least five years.

The peace deal was celebrated in Azerbaijan as a major triumph, but sparked outrage and mass protests in Armenia, where thousands repeatedly took to the streets demanding Pashinyan’s resignation. Scores of protesters on Monday tried to block a highway linking the Armenian capital with the airport to prevent Pashinyan from traveling to Moscow, but police dispersed them.

The Armenian prime minister has defended the deal as a painful but necessary move that prevented Azerbaijan from overrunning the entire Nagorno-Karabakh region.

Azerbaijan and its ally Turkey have shut their borders with Armenia ever since the Nagorno-Karabakh conflict erupted, a blockade that has weakened the economy of the landlocked country.

The Russia-brokered peace deal envisaged the reopening of transport routes, including a corridor linking Azerbaijan and its Nakhchivan exclave that borders Armenia, Turkey and Iran.

Putin noted Monday that senior officials from Armenia, Azerbaijan and Russia will set up a working group to discuss further moves to restore traffic links in the region.