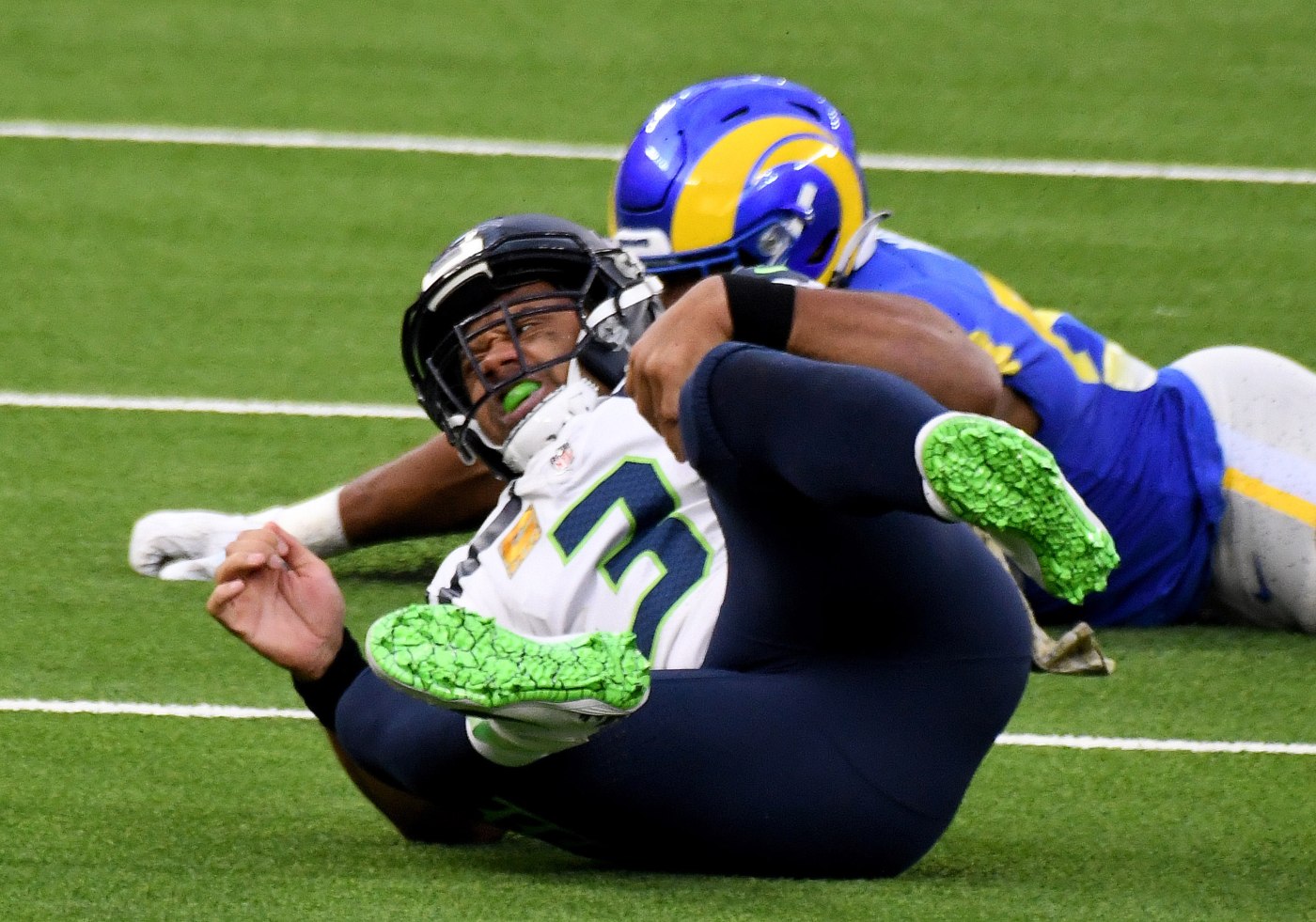 Last Nov. 25, the Rams ran into Lamar Jackson, or would have if they’d caught him.

On Nov. 19, 2018, Pat Mahomes brought his own MVP campaign to Los Angeles. Kansas City’s quarterback completed 36 of 48 passes for 478 yards and six touchdowns. His three interceptions lowered his rating to 117.4, and the Rams cashed two turnovers for touchdowns to win 54-51. But generally Mahomes turned the Coliseum into a barrel and the Rams into fish.

On Sunday, Russell Wilson arrived at SoFi Stadium as the MVP frontrunner. He left with new bruises. His QB rating of 57.5 was his worst since Minnesota dealt him a 37.8 in 2018, and he suffered six sacks and three interceptions. The man who had 11 incompletions in his first two games went 22 for 37, and Seattle had one touchdown in the Rams’ 23-16 win.

It is a measure of the Rams’ unwitting transformation. They are 6-3, although they’re 2-3 when they’re not slurping the tapioca of the NFC East.

More importantly, the Rams’ identifying characteristic is their defense, which is making first-year defensive coordinator Brandon Staley a celebrity.

They have dealt a sub-70 quarterback rating to five of eight quarterbacks, and they have held six of eight opponents to less than 30 points. Miami got most of its 28 points by pillaging the Rams’ offense.

The Greatest Show on Surf, as the 2018 NFC champions were known, has given way to a defense that can perform like a Fearsome Onesome.

“When they’re playing like they have been, you can really ride them,” Rams head coach Sean McVay said. “You can say, let’s make sure we don’t turn it over and we play smart. If we do, we’ll have a chance to win a lot.”

Some of the reasons are as obvious as a salary-cap sheet. Defensive tackle Aaron Donald and defensive back Jalen Ramsey are premier players at premier positions.

But from a civilian eye, the Rams are throwing the first punch more often. Their secondary is jumping in and out of blitzes that might or might not be blitzes, and their D-line is spinning and stunting. Wilson, who has Joe Montana levels of cleverness and alertness, was besieged from all sides.

“We’ve got a lot of guys playing like star players,” Donald said. “We’re able to give so many looks that it kinda messes with their eyes. They’re not allowed to just focus on one guy at a time. That gives guys a chance to dominate, make plays in the backfield.”

Leonard Floyd, who was in Chicago when Staley was on that staff, has rekindled his pass-rushing career, and the secondary is giving Donald’s guys enough time to surround quarterbacks.

“They’ve created a brotherhood back there,” Staley said. “They allow us to play with versatility. You’re not certain what they’re doing.”

Much of this is the handiwork of …read more