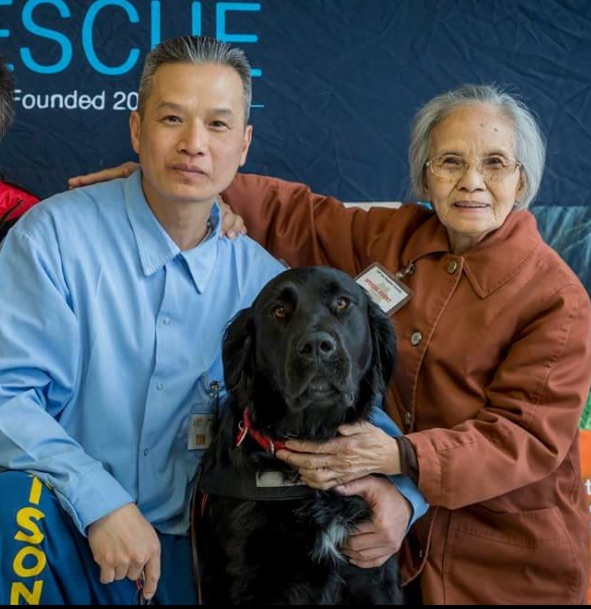 Tin Nguyen arrived from Vietnam as a boy, in 1979, with hope for a better future in a new country. But his refugee story took a bad turn.

As the only Vietnamese kid in his grade school classes, he was bullied. As a teen, he joined gangs and, as an adult, he committed crimes. Nguyen ended up doing 20 years for murder and robbery.

But Nguyen turned his life around in prison. And, last year, after his sentence was commuted, he was given a chance at freedom.

That’s when he was picked up for deportation, to be sent back to a country he hadn’t seen for decades.

On Wednesday, a day after a petition was filed in court seeking his release, his family and supporters, including two regional Congressional representatives, gathered outside the Santa Ana offices of Immigration and Customs Enforcement to draw attention to Nguyen’s plight. In seeking his release from the Adelanto ICE Processing Center, they said his detention is unconstitutional and a violation of an agreement between Vietnam and the United States.

“We’re calling on our elected officials, community members, and our Vietnamese community in Orange County, to take action to prevent the deportation of a Vietnamese refugee,” said Allison Vo, of VietRise, a local social justice organization.

As a second grader in Pomona and the only Vietnamese kid in his class, he was called names and bullied. As a teen, he used drugs and drank and he joined Vietnamese gangs, one in Pomona and, later, a separate gang in Los Angeles.

In 1996, he killed a jewelry importer in San Jose. Three years later, after being found guilty of murder and robbery, Nguyen was sentenced to life in prison without the possibility of parole.

For some two decades, Nguyen felt remorse and, according to his family and supporters, worked to turn his life around within the confines of prison.

In a 2018 interview with the online publication Boom California, Nguyen said: “How do I express my remorse and say, “I am so sorry” to a man whose life and future I took, to a family whom I hurt, or to the community I damaged? It’s not enough. And I realize that I must do this in person…”

He took college classes through a Cal State program at Lancaster prison. And he overcame his fear of dogs to work in a program that trains shelter dogs to work as therapy animals.

“Twenty years in prison changes a man’s life,” said Nguyen’s sister, Cheri Li, of West Covina. “Tin today is college educated, disciplined, compassionate and eager to give back to society.”

One prison to another

On Christmas Eve 2018, California Gov. Jerry Brown commuted his sentence. And a year later, Nguyen, a parolee, walked out of prison in Lancaster, only to be picked up by immigration agents who took him to an immigration detention facility in San Bernardino County.

Nguyen remains at the …read more