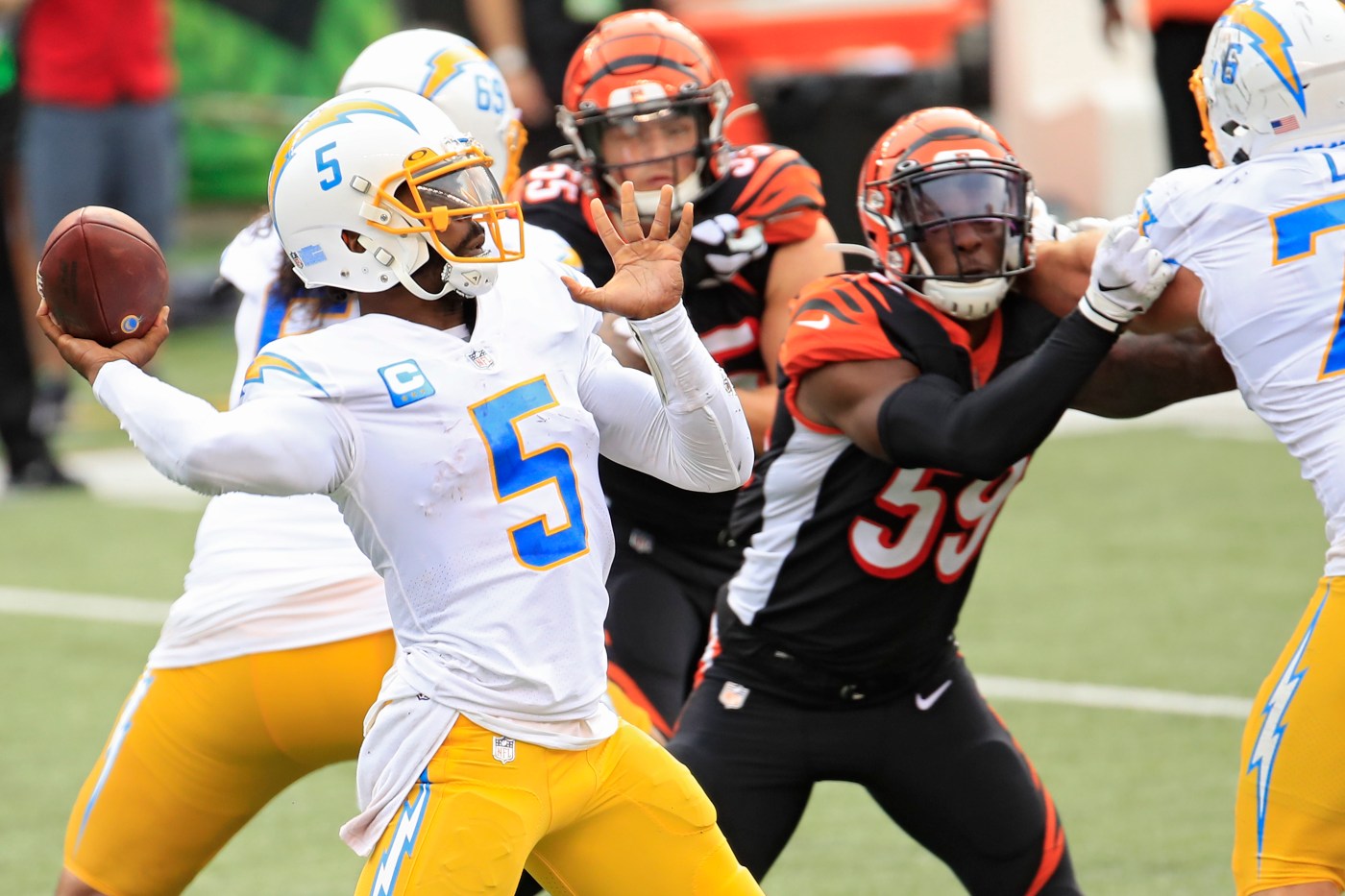 COSTA MESA — Chargers quarterback Tyrod Taylor will get opportunities to correct the mistakes he had last week against the Cincinnati Bengals during his first start in nearly two years.

Taylor missed throws, struggled to get the offense in rhythm and failed to convert two fourth-and-short plays in the second quarter with him keeping the ball.

“Convert them,” Taylor jokingly said Wednesday when asked what he could have done better on the two plays. “Just execute better and it starts with me. I can be better and that leads throughout the rest of the offense.”

They sent displeased tweets Sunday about Taylor’s shaky performance and quickly looked past the win because Chiefs star quarterback Patrick Mahomes was next on the schedule. The Chiefs are favored by 8 1/2 points against the Chargers.

Lynn doesn’t have a Twitter account to see the screams for Herbert. Even if he did, he’s not going to change his quarterback plans after one game. Lynn has repeatedly said this is Taylor’s team at least for the 2020 season, and will be patient with Herbert’s development.

But if Lynn’s big-picture words aren’t enough to calm disgruntled fans, he can just point to this week’s opponent.

Chiefs coach Andy Reid knows what it’s like to have a prominent first-round rookie quarterback sit on the bench while preaching patience to a fan base.

Before Mahomes became arguably the league’s best quarterback, he was Alex Smith’s backup for the 2017 season. Three years later, Mahomes has a Super Bowl trophy and an MVP award.

Ashley Martson: I'm Divorcing Jay Smith ... And It's My Fault

Mahomes has said he wouldn’t have had the success he had without Smith’s guidance during his rookie season.

Herbert is getting similar guidance from Taylor, a 10-year veteran who has started many games and won a Super Bowl with the Baltimore Ravens as a backup.

“I’m sure Justin is sitting right there taking everything in,” Reid said Wednesday during a conference call with Chargers reporters. “Tyrod does it the right way. I was lucky enough to coach him in the Pro Bowl and he wanted to know everything about everything. Even in the Pro Bowl. … He’s a professional

“(Taylor’s) not gonna give away the position. He’s gonna play. At the same time, for a young guy to be behind him, (Herbert) can sit and learn from him too.”

The Chiefs posted a 10-6 record and won the AFC West during Smith’s final season before Mahomes took over. Winning helped, but Reid said there wasn’t much pressure to play Mahomes his rookie season because it was established early that it was Smith’s job.

Smith didn’t look over his shoulder, and that’s what Lynn is doing for Taylor this season. Herbert can prepare without being rushed, the same way …read more