Alexander: Dodgers clinch a playoff berth, but hold the champagne 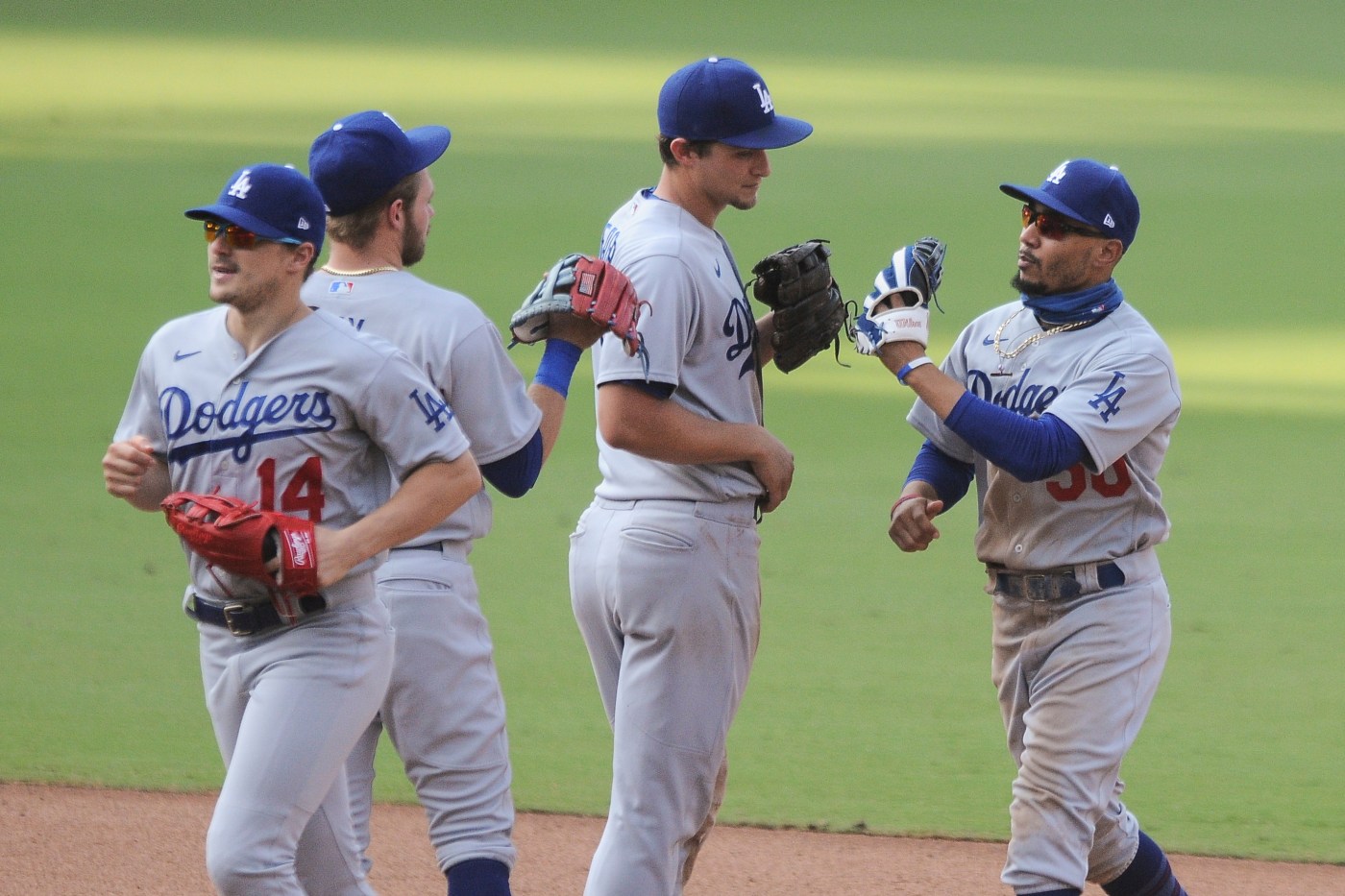 This was their coming out party, their measuring stick, their opportunity to demonstrate that they not only could play with the big, bad Dodgers but beat them. There may have been a ballpark full of empty seats, representing the limitations of Pandemic Baseball, but the young Padres made plenty of their own noise in the dugout Monday night in a 7-2 win, their youthful exuberance coming through (and annoying their elders).

But the home side at Petco Park was relatively placid the next two games, and when the Dodgers left San Diego Wednesday afternoon with a 7-5 win they’d not only won two of three but became the first team to clinch a spot in MLB’s new and even more ginormous postseason format.

Here’s a hint as to just how these things work in 2020: The Dodgers, through seven straight division championships, have prided themselves on celebrating everything, and in fact that’s been Dave Roberts’ guiding philosophy: You achieve something, you splash the champagne.

“We’re not allowed to,” said pitcher Dustin May, via Zoom.

That makes sense on two levels. One, coronavirus protocols don’t tend to mesh with wild clubhouse celebrations, because it’s hard to social distance and pour the bubbly over someone’s head. Two, with 16 postseason entrants and a format that the commissioner’s office still seems to be putting together as it goes along, it has become more akin to an NBA team earning a playoff berth. If you do, it’s just the first step. If you don’t, you’ve failed horribly.

This three-game set, which decided the season series with the Dodgers winning six of the 10 meetings with San Diego (and thus a potential tiebreaker), probably was less of a big series than it had appeared. Yes, it was huge from the Padres’ standpoint as far as making a statement, but both teams are assured of playing in October. And should both take care of business in what could be a harrowing best-of-three first round, odds are they’ll be playing each other in the Division Series on the neutral turf of Arlington’s Globe Life Field.

“It’s been a fun group to play with,” said Padres catcher Jason Castro, the former Angel who was one of the new additions added to San Diego’s roster in A.J. Preller’s flurry of deals, via Zoom after Wednesday’s game. “The type of baseball that we’re capable of playing, with the lineup and the arms that we have, the starting rotation and out of the pen, it’s a pretty special group. So I think there’s no doubt that we could easily be right there with them.”

For the Dodgers, beyond the pride of an eighth straight division title –  they now lead San Diego by 3 1/2 games in the NL West with 10 to play, and were five games ahead of fellow division leaders Atlanta and the Cubs going into Wednesday – is it really worth it to bust their tails for the No. 1 …read more