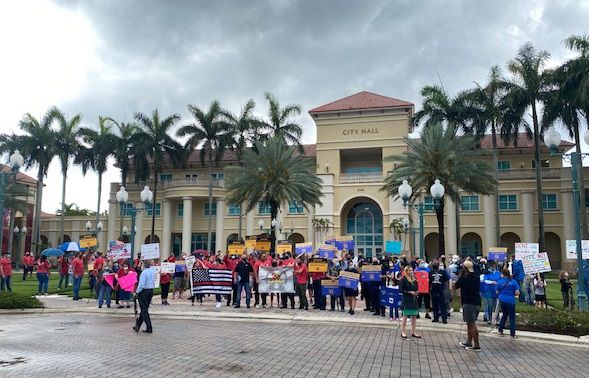 More than 100 people, including city employees, firefighters and police officers, showed up in front of Miramar City Hall Wednesday to protest furloughs that were set to go into effect on June 11. Inside city hall at 7 p.m., the commission was holding a meeting.

The protesters were there to send a message against the announcement made on Monday.

The furloughs were to save a projected $3.8 million. In total, the city says it’s taking various measures to overcome a $23 million shortfall as a result of the coronavirus pandemic. This amounts to a 20 percent pay cut to every city worker, including police and firefighters.

There has been backlash ever since the announcement. A petition against the move has garnered more than 7,300 signatures.

Protesters line up in front of Miramar City Hall where city leaders will be debating furloughs to every city worker including police and firefighters. (Terrell Forney/)

Miramar City Manager Vernon Hargray changed the timeline from six months of furlough to three a few days after the memo.

On Wednesday, yet another memo from Hargray that read: “Upon further discussion with staff, union reps, commissions and the public, I am exploring other alternatives outside of implement furloughs.”

Public safety unions had a lot to say about the talk of the furloughs, some even alleging mismanagement of funds.

Hargray and other city leaders have said that COVID-19, amid a decline in various tax revenues and fees for city services, made the furlough essential.

Mackenzie McKee: Okay, Fine, My Husband Didn't Cheat on Me. But Still!

>See the petition at Change.org.